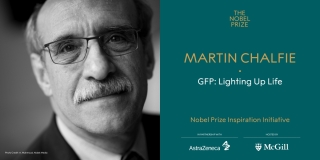 We are delighted to invite you to a lecture by Nobel Laureate Dr Martin Chalfie on Thursday, September 26 from 2:00 p.m. to 3:30 p.m.

The lecture ‘GFP: Lighting Up Life’ will tell the story of Dr. Chalfie's discovery of green fluorescent protein (GFP), which led to his Nobel Prize in 2008.

Before the early 1990s, observations in biology were usually done on dead specimens, which allowed a glimpse of what cells were doing yet provided only a static view of life. GFP and other fluorescent proteins revolutionized the biological sciences by allowing scientists to look at the inner workings of living cells.

The story shows how scientific progress is often made: through accidental discoveries, the willingness to ignore previous assumptions, and the combined efforts of many people.

The lecture is part of the Nobel Prize Inspiration Initiative.