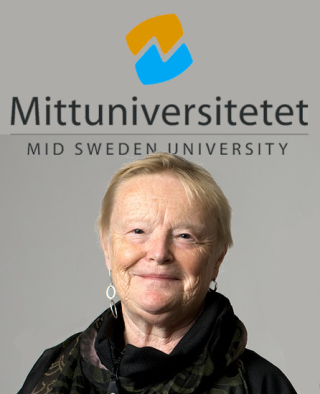 Dr. Claudia Mitchell, of our Department of Integrated Studies in Education, is the recipient of an Honorary Doctorate from Mid Sweden University's Faculty of Human Sciences. This commendation, a result of her nomination by the interdisciplinary Gender Studies Forum at Mid Sweden University, will be delivered officially on October 9th, 2015.

"Professor Claudia Mitchell, a James McGill Professor at McGill University, Montreal, Canada, and honorary professor at the University of KwaZulu-Natal, Durban, South Africa, is active in several different disciplines, such as education, sociology, and gender studies," begins Mid Sweden University's acknowledgement. "She has worked extensively in North America, Africa, Asia, Oceania, and Europe. On several occasions Mitchell has visited Mid Sweden University, and during the fall of 2014 she was guest professor at Mid Sweden University's department of sociology and gender studies... Mitchell is the leader of research projects in different parts of the world with a focus on participatory, visual and art-based research methods for social change, girl studies, teacher identity and memory studies as well as youth culture, gender, and AIDS prevention. Her exceptional experience in international projects and her experience as advisor for UNESCO and UNICEF, among others, and her engagement in  improvement of living conditions for girls and young women, particularly in the context of sexual violence,  and her work for social change more broadly positions Mitchell as one of the most outstanding researchers in those areas.”

Professor Mitchell is currently Director of the Participatory Cultures Lab, established in 2010. She is Project Manager of the ATTSVE Research Project (Agricultural Training Through Stronger Vocational Education) in Ethiopia, Co-Principal Investigator of the Networks for Change and Well-being Partnership, and Interim Director of the proposed McGill Institute for Human Development and Well-Being. In 2006 Dr. Mitchell founded YAHAnet (Youth, the Arts, HIV & AIDS Network). In addition she is Research Partner with the national Taking Action! project (Art and Aboriginal Youth Leadership for HIV Prevention) and Editor-in-Chief with the journal Girlhood Studies: An Interdisciplinary Journal.

“What cuts across my research is a commitment to democratizing the research process," said Dr. Mitchell. "While I have always been interested in questions about the perspectives of ordinary people and how they can be ‘seen and heard’, I began to dedicate my work to deepening an understanding of methods and tools that could facilitate this when working in South Africa. In my work with young people and teachers in rural areas I saw firsthand what the idea of ‘sick of AIDS’ looked like when people gave up hope."

"In my research I have refined participatory arts-based methods such as photography and participatory video to do more than just give a voice to participants; through these methods participants, and especially young people, begin to become resources to each other and, even more importantly they engage other audiences, even policy-makers. In applying these approaches to addressing issues of gender violence against indigenous girls and young women in Canada, South Africa, and Ethiopia, I have begun to refer to this work as “girl-led ‘from the ground-up' policy-making". This is also a focus of my work in Girlhood Studies more broadly as highlighted in the journal that I co-founded several years ago, Girlhood Studies: An Interdisciplinary Journal. We can build a world that is safe and secure –but we have to start with listening to those who are most affected."