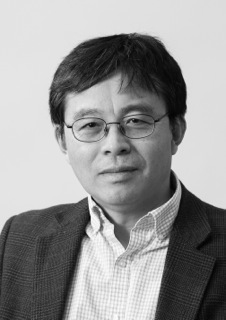 Lead halide perovskites have been demonstrated as high performance materials in solar cells and light-emitting devices. These materials are characterized by coherent band transport expected from crystalline semiconductors, but dielectric responses and phonon dynamics typical of liquids. Here we explain the essential physics in this class of materials based on their dielectric functions and dynamic symmetry breaking on nano scales. We show that the dielectric function in the THz region may lead to dynamic and local ordering of polar nano domains by an extra electron or hole, resulting a quasiparticle which we call a ferroelectric large polaron, a concept similar to solvation in chemistry. Compared to a conventional large polaron, the collective nature of polarization in a ferroelectric large polaron may give rise to order(s)-of-magnitude larger reduction in the Coulomb potential. We suggest that the shape of a ferroelectric polaron resembles that of a Belgian waffle. The ferroelectric or Belgian waffle polarons may explain the defect tolerance and low recombination rates of charge carriers in lead halide perovskites, as well as providing a design principle of the “perfect” semiconductor for optoelectronics.

Xiaoyang Zhu is the Howard Family Professor of Nanoscience and a Professor of Chemistry at Columbia University. He received a BS degree from Fudan University in 1984 and a PhD from the University of Texas at Austin in 1989. After postdoctoral research with Gerhard Ertl at the Fritz-Haber-Institute, he joined the faculty at Southern Illinois University as an Assistant Professor in 1993. In 1997, he moved to the University of Minnesota as a tenured Associate Professor, later a Full Professor, and a Merck endowed professor. In 2009, he returned to the University of Texas at Austin as the Vauquelin Regents Professor and Served as directors of the DOE Energy Frontier Research Center (EFRC) and the Center for Materials Chemistry. In 2013, he moved to Columbia University. His honors include a Dreyfus New Faculty Award, a Cottrell Scholar Award, a Friedrich Wilhelm Bessel Award, APS Fellow, a Vannevar Bush Faculty Fellow Award from DOD, and an Ahmed Zewail Award from the American Chemical Society. Among his professional activities, he serves on the editorial/advisory boards of Science Advances, Chemical Physics, and Progress in Surface Science, and as a scientific advisor to Brookhaven National Laboratory and the Fritz-Haber-Institute of the Max-Planck Society.