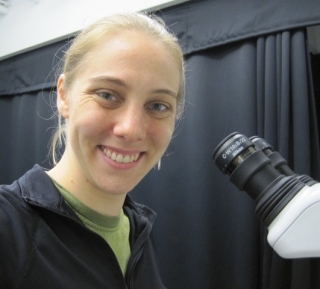 Living cells are divided into functional compartments called organelles. In eukaryotes, lipid membranes separate organelles from the cytoplasm such that each compartment maintains a distinct biochemical composition that is tailored to its function. In contrast, prokaryotes typically lack internal membranes and instead must use other mechanisms to spatially organize the cell. One possible alternative is liquid-liquid phase separation (LLPS), which has recently emerged as a novel mechanism for compartmentalization in eukaryotic cells. For example, the nucleolus assembles by LLPS as soluble components condense from the nucleoplasm to form dynamic droplets around ribosomal DNA. We hypothesize that a similar process occurs in bacteria to regulate ribosome biogenesis in response to nutrient availability. Indeed, when cells are up-shifted to rich medium, RNA polymerase concentrates into distinct clusters that correlate with ribosomal RNA transcription. We are currently testing whether these clusters represent structural and/or functional homologs of the eukaryotic nucleolus. If so, then LLPS may serve as a universal organizing principle that extends across the entire tree of life.

Working jointly with Julie Theriot and Andy Spakowitz as a graduate student, she characterized the dynamics of chromosomal loci in bacteria and discovered that their anomalous motion is governed by the physical properties of the cytoplasm as well as nonequilibrium ATP-dependent biological activity. As a Damon Runyon Postdoctoral Fellow with Cliff Brangwynne at Princeton University, Dr. Weber demonstrated that the nucleolus, a large membraneless organelle, assembles through phase separation of the nucleoplasm and scales with cell size during embryonic development and multicellular growth.