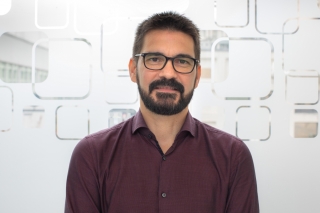 The chemical reactivity of electronically excited molecules differs fundamentally from that in the ground state. This is the underlying reactivity concept of photochemistry, which has traditionally allowed the development of unique chemical transformations not achievable via conventional ground-state pathways. For example, an excited-state molecule is both a better electron-donor (i.e. a better reductant) and electron-acceptor (i.e. a better oxidant) than in the ground state. This explains why the light excitation of organic molecules can unlock unconventional reactivity manifolds. In this context, our laboratory has been exploring the potential of some organocatalytic and organometallic intermediates to directly reach an electronically excited state upon visible-light absorption to then switch on novel catalytic functions that are unavailable to ground-stat organocatalysis. Studying the mechanism of these photochemical approaches allowed us to expand the synthetic possibilities offered by the excited-state reactivity of organocatalytic intermediates.

He studied Chemistry at the University of Bologna – Alma Mater Studiorum (Italy), where he graduated in 1999. He received his PhD in Chemistry in 2003 at Bologna University working in the area of asymmetric catalysis, under the direction of Professor Achille Umani-Ronchi and the supervision of Professor Pier Giorgio Cozzi. In 2002, he spent a period in Denmark working with Professor Karl Anker Jørgensen at the “Center for Catalysis”, Århus University, where his studies centered on asymmetric organocatalysis. In 2003, Paolo worked as a postdoctoral associate with Professor Giuseppe Bartoli, at the Industrial Chemistry Faculty of the Bologna University. In October 2007, he took a permanent position as an Assistant Professor at Bologna University. In September 2009, Paolo joined the Institute of Chemical Research of Catalonia (ICIQ) in Tarragona as an ICREA (Catalan Institution of Research and Advanced Studies) Professor and ICIQ Group Leader.