Made possible by the generosity and vision of Sophie Nappert, BCL’86, LLB’86, a noted arbitrator in independent practice who is based in London, this essay contest invites participants to submit unpublished papers on commercial arbitration or investment arbitration. The next competition will take place in 2022.

It is our pleasure to announce the winners of the fifth edition of the competition as selected by the jury: The winners will present their papers at a symposium hosted (in-person) at the Faculty of Law, McGill University on October 18, 2022 at 5pm. The three winners will compete for a $1,000 award for the Best Oralist. To attend the event, register here.

We are immensely grateful to our jury for their careful evaluation of the essay submissions for the prize.

We are also grateful to Sophie Nappert, BCL’86, LLB’86, whose generosity and vision has made this prize possible.

Any questions may be directed to nappertprize [at] mcgill.ca (Ms. Tanya Oberoi). See the 2022 Call for Papers.

We are happy to present the winners of the fourth edition of the competition, as selected by the jury:

The winners presented their papers at an online symposium hosted by McGill University on October 20, 2020. At the symposium, the three winners competed for a $1,000 award for best oralist, which was won by Cara North.

We are grateful to our jury for their careful and thorough consideration of the essays.

We are also grateful to Sophie Nappert, BCL’86, LLB’86, whose generosity and vision have made this prize possible. The next Nappert Prize competition will be held in 2022.

Here are the winners of this third edition of this competition, as selected by the jury:

The winners came to present their papers at a symposium hosted by McGill University on November 1, 2018, where Ms Wisniewski also captured the $1,000 award for best oralist. We are grateful to the jury for its careful and thorough consideration of the essays:

For this edition, we received over 80 submissions from scholars and junior practitioners from (almost) every continent. This was the first year that the Prize accepted papers written in Spanish which, with the existing inclusion of French and English, makes this a trilingual competition! This is a fitting reflection of the diversity and multiculturalism inherent to international arbitration.

The jury has selected the following papers as the winners of this second edition of this competition:

The winners will present their papers at the Nappert Symposium on October 19, 2016, at McGill University's Faculty of Law. Registration to the symposium is free but mandatory.

The Nappert Prize winners will also have the opportunity to compete for a 1,000$ award to be given to the best oralist by a panel comprised of Professor Andrea K. Bjorklund (McGill), the Hon. Pierre Dalphond (Stikeman Elliott), and Professor Céline Lévesque (University of Ottawa).

We are grateful to the jury for its careful and thorough consideration of the essays:

For this edition, we received over 70 submissions from scholars and junior practitioners affiliated with more than 60 institutions, and hailing from places such as Algeria, Argentina, Brazil, Canada, China, India, Italy, Peru, the Philippines, Vietnam, the UK, and the USA.

Most of the applicants were affiliated with institutions in either Europe or North America, and almost a quarter of the submissions were from Asia, more specifically from India and China. Approximately 40% of the authors were women, and the other 60% were men, and most were between 20 and 29 years old. 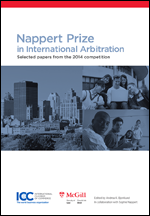 The ICC, in cooperation with McGill University, has released a collection of the best articles written by participants of the 2014 Nappert Prize competition.

Edited by Professor Andrea Bjorklund, holder of the Fortier Chair, the collection is composed of nine articles chosen by experienced practitioners and arbitration experts from the inaugural Nappert Prize Competition in International Arbitration organized by McGill University's Faculty of Law in 2014.

To find out more, visit store.iccwbo.org/nappert-prize-in-international-arbitration