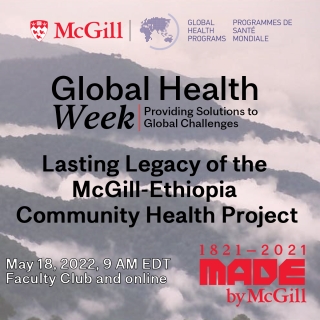 This panel discussion will reflect upon the legacy and impact of the McGill-Ethiopia Community Health Project, which was carried out in several phases in the 1980s-1990s. The event will feature an expert panel of global health researchers who were closely involved in the project. The event will begin with the debut screening of a 5-minute mini-documentary encapsulating the Ethiopia Community Health Project.

Ahead of the event, Panel Moderator, McGill GHP Interim Director Dr. Charles Larson shared a few thoughts on his time on the McGill-Ethiopia Community Health Project.

Dr. Abdulaziz Adish is a Physician with over 30 years of experience in public health, working in areas of primary health care, child immunization, and micronutrient deficiencies in developing countries. He has a PhD in Nutritional from McGill University in Montreal, Canada and a Masters in Public Health in Primary Health Care from Addis Ababa University, Ethiopia. Prior to joining Nutrition International, Abdulaziz worked as Chief of UNICEF’s Nutrition Section in Jakarta and a Technical Officer for the introduction of new vaccines in South East Africa (WHO SARO). His background includes employment as an Assistant Professor at the Jimma Institute of Health Sciences. Abdulaziz has published over 30 articles in peer-reviewed scientific journals, authored more than ten technical reports and presented more than 100 papers related to the planning and implementation of nutrition programs.

Richard L. Cruess graduated with a Bachelor of Arts from Princeton in 1951 and an MD from Columbia University in 1955. Having completed residency training in orthopedic surgery at the Royal Victoria Hospital and Columbia University, he joined the Faculty of Medicine at McGill University and has spent his entire professional career in that institution. He is Dean Emeritus and Emeritus Professor of Surgery and of the McGill Institute for Health Sciences Education. An orthopedic surgeon, he served as Chair of Orthopedics (1976-1981), directing a basic science laboratory and publishing extensively in the field. He was Dean of the Faculty of Medicine from 1981 to 1995. He was President of the Canadian Orthopedic Association (1977-1978), the American Orthopedic Research Society (1975-1976), and the Association of Canadian Medical Colleges (1992-1994). He is the recipient of an honorary degree from Laval University. He is a Companion of the Order of Canada and an Officer of l’Ordre National du Québec. Since 1995, with his wife Dr. Sylvia Cruess, he has taught and carried out independent research on professionalism in medicine. They have published widely on the subject and been invited speakers at universities, hospitals, and professional organizations throughout the world. Together they have received the Ian Hart Award from the Canadian Association of Medical Education, the Gold Medal of the Association for the Study of Medical Education (ASME) in the United Kingdom, and the Flexner Award from the Association of American Medical Colleges. In 2010 McGill University established the Richard and Sylvia Cruess Chair in Medical Education and in 2018 the McGill University Health Centre named its principal amphitheater in their honor.

Dr. Pickering is a general internist, currently the Director of the Medical Clinical Teaching Units at the Royal Victoria Hospital, McGill University Health Centre and an associate member of the McGill Institute for Health Sciences Education. After training in internal medicine, community medicine and epidemiology, she worked with the McGill Ethiopia Community Health Project for 3 years between 1988 and 1992 and was the director of this project from 1991-1992. She was the course director for the course Health in Developing Countries in the McGill Department of Epidemiology and Biostatistics between 1994 and 2004. She has continued to return to Ethiopia to teach in the context of the current link between the McGill Division of Infectious Diseases and Addis Ababa University. She has been actively involved in medical education, and was the Associate Dean of undergraduate medical education at McGill from 2004 to 2011. She has taught epidemiology and medical education in Ethiopia, Uganda, Russia and Japan and was a visiting professor of medical education at the University of Tokyo in 2013-14. Her clinical work is in general internal medicine and at the Tropical Disease Centre of the McGill University Health Centre.

He has a BSc in Biochemistry (University of Saskatchewan, 1975), Master of Environmental Studies in Nutrition and Environmental Health (York University, 1978), and MSc and PhD in Community Health/Health Services Management/Organization Behaviour (University of Toronto, 1988 & 1992, respectively); and has had a long career in teaching and research. He has over 50 peer reviewed publications and book chapters; and until very recently was active in research and development work in Niger, Mozambique, Uganda, Ethiopia, China and Laos. He has worked in some 45 countries, as a professor in four Canadian universities (Toronto, Alberta, Ryerson and McGill), as the President and CEO of Canadian Physicians for Aid and Relief, and at the International Development Research Centre and Canadian Public Health Association in Ottawa, among others. He strongly believes in the importance of planetary health, the combination of global health and ecological wellness.

Dr. Charles Larson completed his medical degree and subsequent specializations in Pediatrics and Preventive Medicine & Public Health at McGill University. As a medical student he was a co-founder of the Pointe St Charles Community Health Centre, precursor to Quebec's local community clinic system of primary care. In many ways this was his introduction to global health and his eventual career path. His actual global health career began in 1987 when he joined the McGill-Ethiopia Strengthening Community Health Project, which he directed from 1989 to 1992. Dr. Larson then returned to McGill as an Associate Professor in the Departments of Pediatrics and Epidemiology, Biostatistics and Occupational Health (EBOH). He also headed the McGill Global Health Office within the Faculty of Medicine and led a five-year McGill population child health project in Chelyabinsk Russia. In 2002 Dr. Larson moved to Bangladesh where, on secondment from McGill, he directed the Health Systems and Infectious Diseases Division at the International Centre for Diarrheal Diseases Research, Bangladesh (icddr,b), In 2008 Dr. Larson returned to Canada, joining the Department of Pediatrics at the University of British Columbia as Professor and Director of the UBC-BC Children's Hospital Centre for International Child Health (CICH). In 2015, Dr. Larson returned to Montreal at which time he assumed the role of National Coordinator of the Canadian Coalition for Global Health Research (CCGHR) until it merged to become the Canadian Association for Global Health (CAGH). At the same time, he joined the Departments of EBOH and of Pediatrics as an Adjunct Professor, and the McGill Global Health programs, for which he currently serves as the Interim Director. Dr. Larson’s interests focus on capacity building and development or delivery research in support of the scale-up of life-saving interventions in under-five children.

This event will be presented in a hybrid format. Online attendees will be able to watch the live broadcast on YouTube.

McGill University is located on land which has long served as a site of meeting and exchange amongst Indigenous Peoples, including the Haudenosaunee and Anishinabeg Nations. McGill honours, recognizes, and respects these nations as the traditional stewards of the lands and waters on which peoples of the world now gather. Today, this meeting place is still the home to many Indigenous Peoples from across Turtle Island. We are grateful to have the opportunity to work on this land.