Careers in Global and Public Health 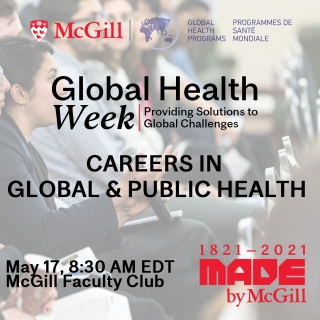 Careers in Global and Public Health

Wondering what you can do with a career in global health or public health? This event will be an opportunity for students to meet professionals from a wide range of careers and backgrounds tied to global and public health, make connections, and learn something new. Also, breakfast will be served!

Dr. Larson completed his medical degree and subsequent specializations in Pediatrics and Preventive Medicine & Public Health at McGill University. As a medical student he was a co-founder of the Pointe St Charles Community Health Centre, precursor to Quebec's local community clinic system of primary care. His global health career began in 1987 when he joined the McGill-Ethiopia Strengthening Community Health Project, which he directed from 1989 to 1992. Dr. Larson then returned to McGill as an Associate Professor in the Departments of Pediatrics and Epidemiology, Biostatistics and Occupational Health (EBOH). He also headed the McGill Global Health Office within the Faculty of Medicine and led a five-year McGill population child health project in Chelyabinsk Russia. In 2002 Dr. Larson moved to Bangladesh where, on secondment from McGill, he directed the Health Systems and Infectious Diseases Division at the International Centre for Diarrheal Diseases Research, Bangladesh (icddr,b), In 2008 Dr. Larson returned to Canada, joining the Department of Pediatrics at the University of British Columbia as Professor and Director of the UBC-BC Children's Hospital Centre for International Child Health (CICH). In 2015, Dr. Larson returned to Montreal at which time he assumed the role of National Coordinator of the Canadian Coalition for Global Health Research (CCGHR) until it merged to become the Canadian Association for Global Health (CAGH). At the same time, he joined the Departments of EBOH and of Pediatrics as an Adjunct Professor, and the McGill Global Health programs, for which he currently serves as the Interim Director. Dr. Larson’s interests focus on capacity building and in development or delivery research in support of the scale up of life saving interventions in under-five children.

Mark Brender is National Director of Partners In Health Canada, a Toronto-based social justice and global health organization striving to make health care a human right for all people. Mark has been with Partners In Health since opening the PIH Canada office in 2011 and sits on the organization’s OnePIH global leadership team. He serves on the board of the Canadian Partnership for Women’s and Children’s Health (CanWaCH) and speaks frequently on global health equity and human rights issues. His writing has appeared in newspapers including The Globe and Mail, Toronto Star, and Ottawa Citizen. Prior to joining Partners In Health, Mark held leadership positions with national and international charitable organizations, and earlier spent more than a decade as an award-winning hockey journalist. He holds a Master of Journalism from Carleton University and a Bachelor of Arts (Political Science) from McGill University.

Sophie Huddart is a TB epidemiologist and postdoctoral scholar at the University of California, San Francisco. She is interested in TB quality of care, especially how it influences the long-term outcomes of TB patients post-treatment. She also enjoys exploring how advanced analytic techniques and simulation can address scarce data issues in global health. Sophie completed her PhD in Epidemiology at McGill University at the Pai Global TB Group with Prof. Madhukar Pai, Canada Research Chair in Epidemiology & Global Health and the Associate Director of the McGill International TB Centre

Foluso Ishola is a PhD candidate in Epidemiology at McGill University. Prior to doctoral studies, Foluso completed a Bachelor of Medicine & Surgery in Nigeria and an MSc in Public Health at London School of Hygiene and Tropical Medicine. Foluso has worked on reproductive, maternal and child health interventions for ministries of health, intergovernmental agencies, and not-for-profit organizations throughout North America and sub-Saharan Africa.

Sarah Mughal has been working in the mental health field for over a decade in non-profit, start-up, government, and community settings. She has a Masters of Public Health in Social Inequities in Health from Simon Fraser University, and she is currently pursuing a PhD in Psychiatry focused on mental health service research here at McGill University. Some highlights of her career have included working as the Director of Service Innovation at Kids Help Phone building new services for young people, the Director of Programs & Evaluation at Jack.org advancing youth-led mental health promotion in communities across Canada, and acting as a member of the Mental Health Commission of Canada's Technical Committee responsible for designing the world's first National Standard for Post-Secondary Student Mental Health and Wellbeing. Sarah is a strong subject matter expert in mental health, health equity, and post-secondary environments.

McGill University is located on land which has long served as a site of meeting and exchange amongst Indigenous Peoples, including the Haudenosaunee and Anishinabeg Nations. McGill honours, recognizes, and respects these nations as the traditional stewards of the lands and waters on which peoples of the world now gather. Today, this meeting place is still the home to many Indigenous Peoples from across Turtle Island. We are grateful to have the opportunity to work on this land.