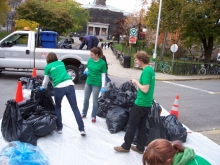 The McGill Office of Sustainability and the Department of Buildings and Grounds is seeking a qualified candidate to fill the role of Zero-waste Coordinator.

McGill’s Waste Reduction and Diversion Task Force was established to identify opportunities to optimize McGill’s waste management system. This Task-Force has recently completed the new 2018-2025 Waste Reduction & Diversion Plan, and is seeking to hire a Zero-Waste Coordinator to implement this Plan. This individual will be responsible for coordinating all aspects of Plan implementation.

Now that circulation on Sherbrooke Street has returned to normal, the inter-campus shuttle bus stop will be moved back to Sherbrooke Street as of Monday, June 12, 2017. However, due to the new street configuration (including wider sidewalks), the pick-up and drop-off location of the shuttle will not return to its previous location (west of the Roddick Gates) but will move to the south side of Sherbrooke Street, 20 metres west of University St. (west of the 24 bus stop, between the McCord Museum and 688 Sherbrooke). This will be its new permanent location.

Impact of the Quebec Construction Strike on McGill

The Quebec-wide construction strike affects construction and renovation projects underway at McGill. A strike of any significant duration will inevitably impact the schedule for completion of our projects.

Update, 06/12: The water shutdown previously scheduled for June 11 and 12 will now take place at the same time on June 12 and 13. The new dates are reflected below.

The City of Montreal has informed McGill that due to municipal construction, some downtown campus buildings will lack water for up to 15 hours on May 31 and June 1. For the City’s scheduled water shutdown schedule, please consult the table below.

As well, some streets near the campus will be closed from Friday evening through Saturday morning, with the following implications for traffic and parking:

Clean+Green: Macdonald Campus clean-up on MAY 31