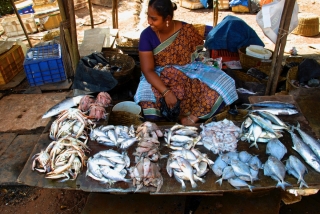 Thanks to the pandemic, we know just how quickly food can disappear from supermarket shelves. But it is hard to gauge the vulnerability of our food production system as a whole to abrupt changes, such as those that could be caused by extreme events such as a nuclear war or massive volcanic eruptions.

New research shows that, under abrupt shocks to the food system, oceanic fish stocks could partially offset the loss of land-based agricultural production and provide an important source of animal protein for the planet. But only if the wild-capture fisheries were rebuilt and sustainably managed beforehand.

These findings were recently published by an international team of researchers including McGill University, the Universitat Autònoma de Barcelona (ICTA-UAB), and University of Texas Rio Grande Valley, in the journal PNAS.

“Going into this work, we knew that strengthening regulations to prevent overfishing would ensure higher catch, higher profit and higher resilience of ecosystems to climate change in normal times,” said Eric Galbraith of Earth and Planetary Science at McGill, and one of the authors of the study. “What we found was that effective fisheries management automatically builds a surprisingly large backup supply of edible fish in the sea, at no additional cost. This could serve as a lifesaving resource during a global food emergency — whether caused by a nuclear war, a volcanic eruption or a global pandemic.”

A nuclear war would potentially affect both land and sea

The researchers used global climate models, together with models of the ocean ecosystem, to simulate how nuclear wars of different sizes and intensities would affect the Earth system. Nuclear detonations, like massive volcanic eruptions, could cause huge fires with soot rising into the atmosphere, blocking out sunlight and cooling the atmosphere for several years. The effects would be felt not only on land, but also in the oceans.

The modelling showed that the dark and cold conditions would slow the growth of fish largely due to the decrease in plankton photosynthesis. Just as humans would suffer from the reduced growth of plants on land, fish would go hungry due to the reduction of algae in the sea.

In addition to showing the direct impact of an abrupt climatic change on fish growth, the research points to the urgency of establishing well-managed fisheries.

“We estimated that a nuclear war or massive volcanic explosion might cut the amount of seafood that fishing boats are capable of bringing in worldwide by as much as 30%,” said lead co-author Cheryl Harrison, a professor at the University of Texas Rio Grande Valley. “But our simulations also pointed to the fact that, if fisheries had been well managed before a war, global fish catches could potentially quadruple for one to two years, temporarily replacing nearly half of current animal protein production.”

“If regulations are too weak to protect fish stocks ahead of time, there is basically no buffer,” adds Kim Scherrer, lead co-author and researcher at ICTA-UAB. “No matter how high the fish prices go, there just aren’t any more fish to catch. However, if fish stocks are abundant, this can serve as a reservoir of food in case of emergency.”

“Marine wild-capture fisheries after nuclear war” by Kim J. N. Scherrer was published in PNAS. The research was funded by the European Research Council under the European Union’s Horizon 2020 Research and Innovation Programme under Grant Agreement 682602, with partial support from the Spanish Ministry of Science, Innovation and Universities, through the Acciones de Programación Conjunta Internacional and the Open Philanthropy Project.