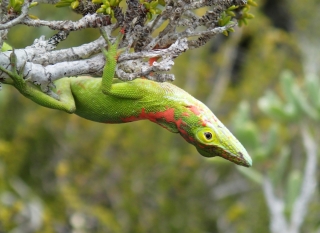 Invading predators can devastate an ecosystem. In fact, a leading cause of extinction is the introduction of predators into an isolated system like an island or a lake. The destruction is usually blamed on the predator, but sometimes the key lies in the prey animals’ behavior, according to an international team of researchers led by Princeton’s Robert Pringle.

The question is rapidly becoming more pressing, noted co-author Rowan Barrett, the Canada Research Chair of Biodiversity Science at McGill University in Montreal, Quebec. “Human activity is increasing the occurrence of new predators being introduced to formerly isolated ecosystems,” he said. “Our work shows that the consequences for biodiversity of invasions by predators can depend strongly on changes in prey behavior that alter the way prey species use their environments.”

The researchers traveled to 16 small islands in the Bahamas that they used as experimental ecosystems. They found that in the absence of predators, the two anole species coexisted just fine, with green anoles in trees and brown anoles living closer to the ground. The two species competed for insects, but the competition was “not severe,” Pringle said. But when the team introduced the curly-tailed predators, the brown anoles fled to the trees, where the chunky ground-dwelling lizard couldn’t follow. This intensified the competition between the two prey species for space and food, which undermined their ability to coexist. The results suggest that when prey can respond rapidly to the presence of a predator by changing their behavior, predators might typically reduce the ability of prey species to coexist.

“You really can’t understand predator-prey interactions — or how predators will affect biodiversity and ecosystems — without understanding the behavior of the prey,” said Pringle. “The ways in which prey change their behavior to avoid getting eaten is a hard thing to predict, but without understanding that, you can’t predict anything else. Most theory in ecology simply assumes that predators eat prey, end of story. The real world is more complicated than that. But it’s not so complicated that we can’t get to the bottom of it.”

Scientists have long known how important “keystone predators” are for healthy ecosystems. According to the keystone predator theory, top predators can prevent any one prey species from becoming too abundant and outcompeting all the other prey species, which should generally increase the diversity of the species at low levels of the food chain. While this study does not overturn any of that research, it does highlight that an ecosystem with a top predator will not necessarily be more diverse than one without a top predator.

Scientists still don’t fully understand all the ways introduced predators affect resident prey species. In some cases, of course, an introduced predator can devastate prey populations by simply eating them up. But prey can also respond to predators in ways that reduce their likelihood of getting eaten — like hiding in trees, like the brown anoles did. There, the risk of predation is low, but then these areas become crowded, and competition becomes intense. This leads to the opposite outcome from the classical keystone predation scenario; Pringle’s team called it “refuge competition.”

“After six years of population monitoring, we found that curly-tailed lizards destabilized coexistence of the competing prey species by forcing brown and green anoles to share the same predator-free refuges and intensifying competition between them, leading to the extinction of some populations,” said McGill’s Barrett. Their results therefore challenge the generality of the keystone-predation hypothesis and support the refuge-competition hypothesis in this environment, he said. The researchers also wanted to dig deeper than simple population surveys, so they ran DNA metabarcoding on fecal samples of each lizard species, to analyze their diets. DNA metabarcoding, a powerful tool, showed how the species were competing for food. The researchers also used stable-isotope analysis to analyze how the experimental treatments affected the length of the food chains on the islands and the position of each species in the food chain.

Taken together, the techniques allowed the researchers to understand their results much more deeply, said Pringle. “A lot of times, you’ll run an experiment in the field and get some results, but you won’t necessarily understand why you got those results — you might have a best guess or a favored hypothesis, but it’s often a bit ambiguous,” he said. “It’s been a goal of mine for a long time to integrate new techniques like DNA metabarcoding with established techniques like these muddy-boots field experiments to try to get more insight into mechanism. In this study, we really wove all these elements together over the course of the six-year experiment, and it’s very satisfying.”

“The researchers were able to mimic naturally occurring introductions of new competitors and predators and then track what happens in real time,” said Jodie Jawor, a program director at the National Science Foundation, which funded this research. “This is a rare and valuable test of what happens to communities when new species are introduced. … Habitats and the composition of animal communities can change for various reasons — natural disasters, development, construction — so this work helps us understand the ecological impacts and potentially address them proactively and more fully informed.”

The research was supported by the United States National Science Foundation (grants DEB-1457697 and DEB-1314691), the Princeton Environmental Institute, a Canada Research Chair, and a Vanier Canada Scholarship.