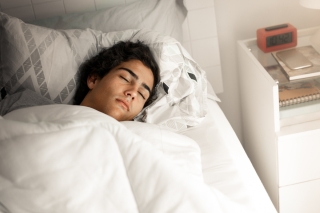 While poor sleep was linked to higher levels of stress during the COVID-19 pandemic, more teens actually obtained the recommended amount of sleep compared to pre-pandemic sleep patterns, according to a new study from McGill University. Changes to daily routines triggered by lockdowns allowed teenagers to follow their biological impulse to wake up and sleep later, reducing daytime sleepiness.

The study, published in Child and Adolescent Psychiatry and Mental Health, explores pre‑pandemic sleep behavior and stress during the COVID-19 pandemic. According to the researchers, encouraging better sleeping habits could help reduce teens’ stress and improve their ability to cope in times of crisis.

“The pandemic has shown that delaying school start times could help and should be implemented by schools interested in supporting the mental health of their students,” says lead author Reut Gruber, a Full Professor in the Department of Psychiatry at McGill University.

During the pandemic, the wake-up and sleep time of teens shifted by about two hours later. Many teens also slept longer and had less of a need to catch up on lost sleep during the weekend.

The elimination of the morning commute, a delayed school start time, and cancellation of extracurricular activities allowed teens to follow their ‘delayed biological rhythm’ – or natural tendency to wake up and go to bed later, the researchers explain.

These changes meant that teens had more ‘useable hours’ during the weekdays to complete their homework and didn’t have to sacrifice sleep to fulfill their obligations during the week. Similar findings have been reported in multiple countries around the world during the COVID-19 pandemic.

The researchers found a connection between the amount of sleep teenagers were getting before the pandemic and their level of perceived stress during the pandemic.

“The tendency of teens not getting enough sleep was already a global concern prior to the COVID-19 pandemic. Now more than ever it’s critical we tackle the problem,” says co-author Sujata Saha, a Principal at Heritage Regional High School of the Riverside School Board. “Across the world the pandemic has increased levels of uncertainty and psychological stress. It’s projected that today’s elevated mental health challenges will continue well beyond the pandemic itself.”

“Not sleeping enough and being overly stimulated before bedtime are poor habits that are modifiable. We can target these behaviours with preventative measures to reduce teens' stress in the face of overwhelming situations like to COVID-19 pandemic,” says Gruber.