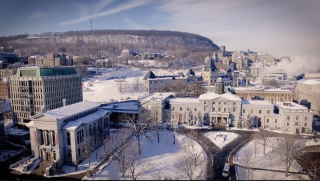 Designed to expand and enhance the University’s commitment to sustainability, the Action Plan lays out a number of specific initiatives to reduce McGill’s carbon footprint over the next three years. It also sets a long-term target of attaining by 2030 a Platinum sustainability rating – the highest possible rating under the Association for the Advancement of Sustainability in Higher Education’s STARS program.

“We knew that if we were going to address climate change on campus, we needed to think beyond 2020. That is why we set these long-term targets,” says McGill’s Sustainability Director, François Miller. “McGill’s extensive collection of heritage buildings, as well as our research-intensive profile, make these targets a unique challenge, but this new plan sets out a roadmap for the long journey ahead.”

An institution achieves carbon neutrality when the amount of greenhouse gases released is equivalent to the amount sequestered or offset. McGill’s own plan for carbon neutrality includes strategies for campus energy systems, air travel, and commuting policies, among other emissions sources. Achieving carbon neutrality by 2040 means that McGill will eliminate its greenhouse gas emissions through significant carbon reduction and, to a lesser extent, carbon sequestration and carbon offsets. This amounts to the equivalent of taking 11,576 cars off the road.

Between 1990 and 2015, McGill reduced its total greenhouse gas emissions by 12%, to 54,060 tonnes of CO2e (carbon dioxide equivalent) per year. The overall reduction included a 25% decrease in emissions from buildings. Emissions from other sources increased during that period due to growth in the University’s population.

The Action Plan outlines 22 short-term actions across five areas (Research, Education, Connectivity, Operations, and Governance & Administration), many of which will move the University closer to achieving its goal of a STARS Platinum rating by 2030.

“Not only did the Vision 2020 process engage a broad cross-section of the McGill community in the creation of the Climate & Sustainability Action Plan, it outlines a series of actions that are to be tackled by units throughout the University,” says Vice-Principal, Administration and Finance, Yves Beauchamp. “This multi-sectoral approach is integral to creating a more resilient and sustainable institution.”

The executive summary of the plan is available in French and will also be available in the three main Indigenous languages in Quebec: Innu-aimun, Cree, and Kanien'keha (Mohawk).

·         Facilitate and support planning of sustainable events across campus

·         Recruit an Indigenous scholar or artist-in-residence