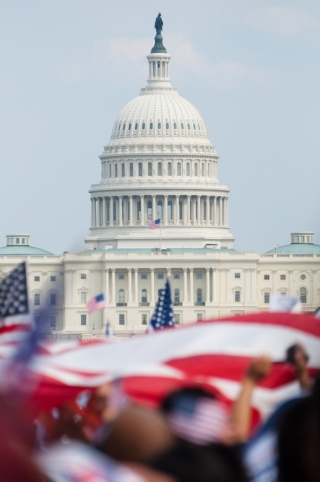 Last week pro-Trump protesters stormed the legislature as lawmakers were set to review the Electoral College votes that made Joe Biden the president. (Globe and Mail)

“Only white people in the United States have the inalienable right to resist perceived government tyranny. In other words, whiteness is in and of itself a monopoly on violence and the use thereof, which means the state cannot ever use violence to overwhelm white people, even during an insurrection. We’re witnessing the afterlife of the U.S. Civil War, the failure to break the resolve of the treasonous Confederacy, and the unmitigated racial terrorism to which white supremacists have ceremoniously subjected African Americans.”

“This is a sad day for U.S. democracy, even as the clear victory of Joe Biden is certified by the U.S. Congress, as it should be. Canadians should pause and draw lessons from the current pathologies of U.S. democracy because Canada is not necessarily immune to them.”

“The insurrection at the Capitol, while shocking, is not surprising. Trump’s refusal to concede defeat in the November election has created even more chaos within his party. While nobody in party leadership actually believes that Trump won, least of all Trump himself, he is using the ‘stolen election’ fiction as a loyalty test for elected officials, who must show their support for the outgoing president by denying reality.”

“This unrest crystallizes the growing polarization of the United States over a host of social, political, legal, religious, and racial issues. The polarization has old roots in distinctive aspects of American society, although it has intensified remarkably during the Trump presidency.”

“This is without precedent in the 231 plus years of the United States. The President directly incited an armed crowd to surge into the very center of the republic, with the intention of carrying out a coup d’état. We can only hope that the Capitol Hill police or National Guard can restore order and restart Congress without violence.”

“The only ones shocked and surprised that fallaciously aggrieved white people would have the gall to storm the US Capitol are other white people. This America – the America of threat and violence and the constant threat of violence – is the American that Black people know intimately. As the media focuses on the spectacle of the insurrection, we should not lose sight of the more than 70 million people, 58 percent of whom are white, that still voted for Trump last November. The danger isn’t just from vigilante insurrectionists – it’s far more ubiquitous than that.”

Debra Thompson is an Associate Professor in Department of Political Science and holds the Canada Research Chair in Racial Inequality in Democratic Societies. She is a leading scholar of the comparative politics of race. Her teaching and research interests focus on the relationships among race, the state, and inequality in democratic societies.