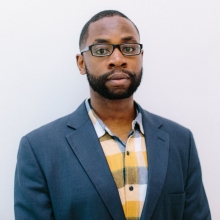 Wendell Nii Laryea Adjetey is a historian of post-Reconstruction United States, specializing on the African American experience. Broadly, his research and writing excavate freedom linkages among the United States, Canada, and other parts of the African Diaspora.

Before arriving at McGill, he held the W. L. Mackenzie King Fellowship at Harvard University’s Weatherhead Center for International Affairs and Department of History Lectureship. Dr. Adjetey’s research has garnered prizes and fellowships from many sources: SSHRC, the Pierre Elliott Trudeau Foundation, University of Pennsylvania, Yale, and Princeton, to name a few. In 2017-18, he was Visiting Scholar and Pre-Doctoral Fellow at MIT, and in 2016-17, Visiting Scholar and Senior Resident Fellow at Massey College, University of Toronto.

Dr. Adjetey’s first monograph—Cross-Border Cosmopolitans: The Making of a Pan-African North America, 1919-1992—is under contract to the University of North Carolina Press. This project situates fundamental questions of twentieth-century U.S. history—immigration, civil rights, racial identity, radicalism, surveillance, and state power—within a North American diasporic frame. He has written essays and articles for The Washington Post, The Globe and Mail, The Toronto Star, The Walrus, and The National Post.

To commemorate the quadricentennial of the arrival of African captives at Jamestown Colony, Dr. Adjetey convened “Pluralism in a Historical Context: Challenges and Opportunities in North America” at the Weatherhead Center. This conference explored the entanglement of Indigenous dispossession, enslavement of Africans and the birth of racial caste, and mass immigration to the United States and Canada in the nineteenth and twentieth centuries.

In addition to serving as Director on multiple Boards that respectively advance citizenship, pluralism, entrepreneurship and innovation, and peacebuilding, Dr. Adjetey is an active member of the Canadian Studies Advisory Committee at Yale University. He earned his B.A. and M.A from the University of Toronto.

Cross-Border Cosmopolitans: The Making of a Pan-African North America, 1919-1992 (manuscript under contract to University of North Carolina Press).