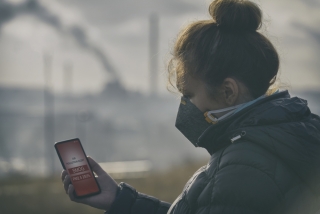 Millions of people die prematurely every year from diseases and cancer caused by air pollution. The first line of defence against this carnage is ambient air quality standards. Yet, according to researchers from McGill University, over half of the world’s population lives without the protection of adequate air quality standards.

Air pollution varies greatly in different parts of the world. But what about the primary weapons against it? To find answers, researchers from McGill University set out to investigate global air quality standards in a study published in the Bulletin of the World Health Organization.

The researchers focused on air pollution called PM2.5 – responsible for an estimated 4.2 million premature deaths every year globally. This includes over a million deaths in China, over half a million in India, almost 200,000 in Europe, and over 50,000 in the United States.

“In Canada, about 5,900 people die every year from air pollution, according to estimates from Health Canada. Air pollution kills almost as many Canadians every three years as COVID-19 killed to date,” says co-author Parisa Ariya, a Professor in the Department of Chemistry at McGill University.

Among the different types of air pollution, PM2.5 kills the most people worldwide. It consists of particles smaller than approximately 2.5 microns – so small that billions of them can fit inside a red blood cell.

“We adopted unprecedented measures to protect people from COVID-19, yet we don’t do enough to avoid the millions of preventable deaths caused by air pollution every year,” says Yevgen Nazarenko, a Research Associate at McGill University who conducted the study with Devendra Pal under the supervision of Professor Ariya.

Surprisingly, the researchers discovered that high population density is not necessarily a barrier to fighting air pollution successfully. Several jurisdictions with densely populated areas were successful in setting and enforcing strict standards. These included Japan, Taiwan, Singapore, El Salvador, Trinidad and Tobago, and the Dominican Republic.

“Our findings show that more than half of the world urgently needs protection in the form of adequate PM2.5 ambient air quality standards. Putting these standards in place everywhere will save countless lives. And where standards are already in place, they should be harmonized globally,” says Nazarenko.

“Even in developed countries, we must work harder to clean up our air to save hundreds of thousands of lives every year,” he says.