Carceral Systems and Racial Justice in Canada: A Conversation on Reform and Abolition 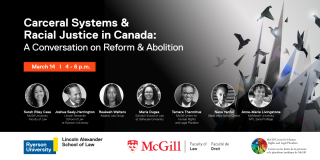 Sarah Riley Case is a Boulton Junior Fellow and Incoming Professor at the McGill Faculty of Law. Her research and teaching focus on critical race theory, slavery and the law, Black life, Third World approaches to international law, settler colonialism and governing the natural world. Professor Riley Case’s work weaves together law, history, conceptions of justice, and the arts.

Anne-Marie Livingstone is an Assistant Professor in the Department of Sociology at McMaster University. Her research focuses on the intersection between race politics, public policy, and racism in Canada. She is a co-author of a 2018 public report on racism in policing in Montreal, produced by the team Montreal Sans Profilage.

Joshua Sealy-Harrington is an Assistant Professor at the Lincoln Alexander School of Law at X University, where he teaches about legal theory and social change and acts as a faculty liaison for the Black Law Students’ Association. He is also a doctoral candidate at Columbia Law School and draws on critical race theory to explore the ways in which law mediates social hierarchy, with a particular focus on the promise and limitations of “identity” rhetoric in legal discourse and advocacy concerning race, gender, sexuality, disability, and class. Lastly, Professor Sealy-Harrington is a lawyer at Power Law and strategically mobilizes criminal and constitutional law to advance the interests of marginalized communities, including as lead counsel before the Supreme Court of Canada, where he previously clerked for two years.

Me Thermitus Ad.E. is a visiting scholar at the McGill Centre for Human Rights and Legal Pluralism. She holds a Master of Laws degree (2013) from McGill University on human rights and was the Chief Negotiator for the federal government of the Truth and Reconciliation Commission. Holder of the Queen Elizabeth Jubilee Medal (2012), Me Thermitus Ad.E. has received numerous awards including the Mérite du Barreau du Québec (2011), the first black lawyer to receive this recognition.

Reakash is a criminal defence lawyer at Addario Law Group and a prison industrial complex abolitionist. She is on the board of Women’s Legal Education and Action Fund (LEAF) and has recent publications in the Canadian Journal of Women and the Law, the Globe and Mail, and Rabble. Reakash is an incoming 2022-2023 clerk at the Supreme Court of Canada.

Nana Yanful is the Black Legal Action Centre’s Legal Director, deeply committed to community and legal work related to anti-Black racism and human rights. Nana completed her articles at the Superior Court of Justice as a Judicial Law Clerk and was called to the Bar in Ontario in 2014, after which she practiced criminal defence law at Simcoe Chambers in Toronto and appeared before all levels of court in Ontario. Nana’s writing on equity, policing and the trust-deficit has appeared in various publications, she is a board member of Women’s Health in Women’s Hands Community Health Centre, and she is a recipient of the 2020 “Lexpert Rising Stars: Leading Lawyers under 40.