Feb. 2, 2018 - Biopolitics and Beyond: New Directions in Indigenous Studies, lecture and panel discussion 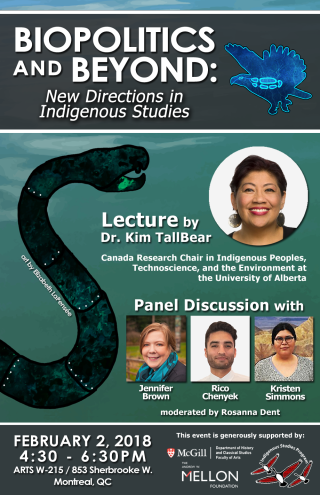 From climate change, to pipeline protests and environmental justice movements, to conceptualizations of kinship with living and non-living beings, emerging scholarship from Indigenous Studies is broadening visions of how to live in the twenty-first century.

This keynote lecture and panel discussion features scholars whose work is pushing the boundaries of science and technology studies through questions such as, how have the biopolitics of settler societies foreclosed possible conceptions of family, health, and environmental resilience? How do Indigenous understandings of human-animal relations and human-land relations challenge existing systems of governance? And how are science and technology being used to limit or strengthen Native sovereignty under twenty-first century multiculturalism?

Poster art: The Indigenous Studies Program would like to thank Elizabeth LaPensée, whose art (from the 2017 video game, Thunderbird Strike) is featured in the event poster. She is Anishinaabe from Baawaating with relations at Bay Mills Indian Community and Métis. She is an Assistant Professor at Michigan State University. Discover more about this award-winning artist on her website.

This event is free and open to the public.

In this lecture, Dr. Kim TallBear will examine the caretaking of relations that she sees embodied in several recent social movements led by women, two-spirit, and queer people. #IdleNoMore, #NoDAPL, and #BlackLivesMatter are commonly understood as environmental and/or social justice/anti-racist movements that call settler-colonial states, including the US and Canada, to make good on their treaty promises or civil and human rights law, to live up to their supposed dreams of liberty and inclusion. Since 2012, Dr. TallBear has watched these movements unfold. Looming large in her vision fed by the 24-hour news cycle and more importantly by friends and colleagues on the ground of those movements and on social media, is Indigenous and black women and queer people caretaking their peoples. In the case of Indigenous-led movements, she also sees a caretaking of other-than-human kin, the land and water—all our relations. In this moment of crisis—new to some but ongoing for many—is an opportunity to unsettle the American Dream that brings violence to so many at home and abroad. Turning our redemptive attention away from empire to instead focus on caretaking relations defies a foundational settler-colonial narrative—that nature/culture binary that puts humans at the top of a hierarchy of life, and white men at the top of that. American dreaming is rooted in a vision that cannot see bodies in mutually sustaining relation. It objectifies black and brown bodies, women’s bodies, land and water bodies, and many bodies on down its hierarchy. The usually white men at the top—be they clergy, statesmen, or scientists—have long viewed it as their civilized prerogative to alternately exploit or steward life according to their animacy hierarchy. Their narratives script a particular structure of violence. This talk proposes instead another productive script.

Jennifer Brown is an Assistant Professor of Anthropology at Pacific Lutheran University in Tacoma, Washington and received her Ph.D. in anthropology from the University of Pennsylvania. Her research draws on science & technology studies, environmental studies, and indigenous critical theory to examine human responses to climate change in Southeast Alaska. In the past, she worked as a tribal health researcher for Southcentral Foundation in Anchorage, Alaska. She is a member of the Kíis Xadaay (Haida) and the Ketchikan Indian community in Ketchikan, Alaska.

Rico Kleinstein Chenyek is an MD/PhD candidate in the Institute of Communications Research and the Medical Scholars Program at the University of Illinois at Urbana-Champaign. Their research focuses on the politics of inclusion in U.S. medicine through a case study of the institutionalization of alternative medicine at the National Institutes of Health. As a scholar of the social and cultural studies of science, medicine, and technology, they also draw on indigenous studies, Latina/o studies, and gender & women’s studies.

Kristen Simmons is a citizen of the Moapa Band of Southern Paiutes and a doctoral student in the Department of Anthropology at the University of Chicago. Her work engages energy projects in the Mojave Desert as part and parcel of the settler colonial project in the American West: white supremacist militia land battles, solar energy development, national security, and new New Age movements. Key to her work is unsettling treatments of indigenous political nations: in settler states, institutions, and disciplines.

Rosanna Dent (moderator, organizer) is a Mellon Postdoctoral Fellow in the Department of History and Classical Studies at McGill. As a historian of science, she studies how Indigenous people and academic scientists have engaged one another in Brazil over the past sixty years. She uses feminist science studies to analyze field-based scholarship across the human sciences, including human genetics, anthropology, and public health. She grew up in southeastern Pennsylvania, a settler on Lenape land.