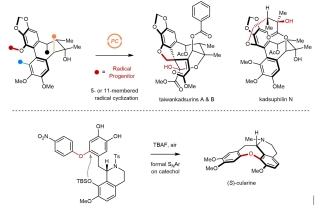 Cytochrome P450, and related iron-containing oxygenases, catalyze a broad range of oxidative bond-forming processes that create complex natural products. Well-known examples include ‘canonical oxidations’, which convert C-H bonds into their corresponding alcohol derivatives (C-OH) via a classical mechanism of rebound. In these well-known cases, C-H abstraction affords a substrate radical that recombines with the enzyme’s Fe-(III)-OH center to form the new C-OH bond. While these oxygenation reactions are widespread, the community is becoming increasingly aware of ‘non-canonical oxidations’, in which rebound is somehow delayed. In these cases, C-H oxidation leads to a broader range of bond forming reactions, which often construct key structural features of the resulting products. Because rebound is typically fast (107 to 1011 s-1), the mechanism of these enzymes, and their ability to escape canonical pathways of oxidation, has attracted considerable interest.

Recently, the Lumb group has reported a complementary set of tools to mimic non-canonical oxidations that shed some light on these cryptic oxidation reactions. The first example comes from the biosynthesis of structurally intricate dibenzocyclooctadiene (DBCOD) lignan metabolites that are isolated from medicinal plants of the Schisandraceae family. In their proposed biosynthesis, a series of non-canonical oxidations trigger either a 5-membered dearomative spirocyclization to generate the taiwankadsurins, or an 11-membered macrocyclization to produce kadsuphilin N. Intrigued by these biosynthetic steps, the Lumb group designed a carefully engineered DBCOD possessing a functional handle at the site of radical formation. Using state-of-the-art photocatalysis, the group then showed that this precursor could be selectively activated in order to generate the hypothetical biosynthetic radicals. From there, they watched as the substrates selected between 5- or 11-membered ring cyclizations, ultimately leading to the desired DBCOD targets in concise and high-yielding sequences.

The second example comes from the biosynthesis of tetrahydroisoquinoline alkaloids isolated from medicinal plants of Dicentra and Corydalis. In this case, the Lumb group explored the key, oxidative C-O bond forming step that introduces the defining diaryl ether of this family of natural products. The group had previously accomplished the syntheses of related alkaloids thalicarpine and tetramethylmagnolamine by intermolecular C-O bond formation. But in this most recent example, they set their sights on an intramolecular cyclization that formed the 7-membered diaryl ether of cularine, following an unexpected mechanism in which a normally nucleophilic catechol plays the role of an electrophile in a nucleophilic aromatic substitution reaction (SNAr).

Both examples set the stage for additional studies, aimed at better understanding the functional properties of these structurally intricate natural products, as well as additional synthetic directions, aimed at using this new arsenal of tools to further mimic non-canonical biosynthetic steps.

To find out more, visit the Lumb Group’s Website (https://www.lumblab.org/), and check out their recently published work in Nature Chemistry and Organic Letters.

“Mimicking oxidative radical cyclizations of lignan biosynthesis using redox-neutral photocatalysis”, by Zheng Huang, and Jean-Philip Lumb was published in the January 2021 issue of the Nature Chemistry.

“Total Synthesis of (S)-Cularine via Nucleophilic Substitution on a Catechol”, by Zheng Huang, Xiang Ji, and Jean-Philip Lumb was published in the January 2021 issue of the Organic Letters.