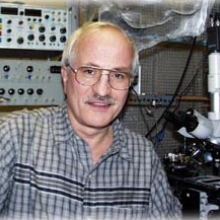 Quantal analysis of both spontaneous and evoked release in the peripheral and the central nervous system has been in focus of my interest for many years. These interests branched recently into two different but complementary directions. First, our examination of the quantal release focuses on what determines the amplitude and the time course of the basic unit of release ­ unitary quantal event. However, the generation of unitary quantal events is a complex kinetic problem of: a) a diffusion from a vesicle through the fusion pore into a restricted space, and b) a reaction between the individual transmitter molecules and receptors located on the postsynaptic membrane. How different factors contribute to shaping the unitary events is still poorly understood. To put the interpretation of experimental findings evaluated on a solid ground we developed Monte Carlo simulation technique to simulate such processes. These simulations provided not only important insights about the physiological mechanisms involved but also those of general methodological interest. We are thus now able to evaluate the validity of a variety of techniques used experimentally. Second we are now studying the vesicular release not only in synapses but also in neuroendocrine cells that do not have a built-in sensor of released substances, a development now possible due to the introduction of electrochemical techniques of amperometric recording.