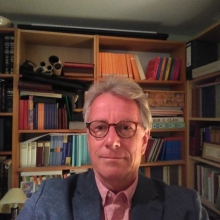 Gerbern S. Oegema has been working in the field of Religious Studies and Adult Education since 30 years, in the Netherlands, Germany, Israel, the United States and now in Canada. Apart from being a professor of religion at McGill University, he was the founder and first director of the McGill Center for Research on Religion (CREOR) as well as the founder and first chair of the Council of theological Education in Montreal. With a deep knowledge of different religious sacred texts and traditions, he has a talent of bringing together people from different disciplines, faiths and cultures and unit them around a common goal. Apart from being a professor in religion, he is also an honorary faculty member of the Presbyterian College in Montreal, served on many committees and was the chair of the Graduate Committee for several years.

He studied Biblical Studies, Jewish Studies and New Testament and Early Judaism from 1977 to 1989 at the Vrije Universiteit in Amsterdam, the Hebrew University of Jerusalem, the Freie Universität Berlin and the Universität Tübingen. From 1986 to 2001 he taught as lecturer, assistant professor and privatdozent at universities in Amsterdam, Berlin, Münster, and Tübingen. In 2002 he came to McGill University and joined the Faculty of Religious Studies, where he is now Professor of Biblical Studies. In 2003 and 2004 he was a scholar in residence at the Center for Theological Inquiry in Princeton, from 2004 to 2007 he held a SSHRC Insight grant and in 2015 and 2018 two SSHRC Connection grants. His research focuses on Second Temple Judaism, apocalypticism, the Pseudepigrapha, and Christian origins. He is the author and co-editor of more than twenty books, the editor of the Oxford Handbook of the Apocrypha, as well as the co-editor of several book series.