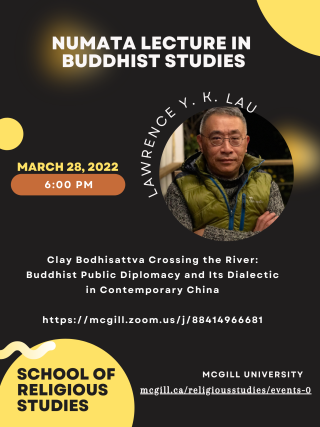 Since the turn of the millennium, Buddhism has been constructed as a cultural “soft power” by China in cultivating ties with Buddhist countries in South, Southeast and Northeast Asia. Over time, Western countries are also added to the list of target audience as China “exports” its Buddhism. This talk identifies similar practices in post-1949 Mao China and provides an analysis for the rationale and strategies for such policies, their corresponding projects, as well as reactions from the international Buddhist communities. It will conclude with an evaluation of the impact of China’s Buddhist diplomatic soft power and its future trajectory.

Lawrence Y.K. Lau is associate professor in the Department of Religious Studies, Fudan University, Shanghai. His primary research areas are Yogācāra Buddhism and Buddhist political-religious relationship under secularization. He recent publications include Kleśa and Vijñapti: A Philosophical Studies on East Asian Vijñānavāda (2020), Monastic Literati and Militants: Interacting among Buddhism, Society and Politics (2020), and Le Bouddhisme engage and Civil Society: A Study of Buddhist Public Engagement in Thailand and Malaysia (2019).