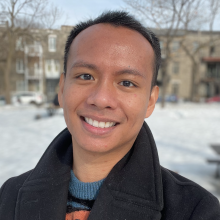 John Wayne dela Cruz was born and raised in the Philippines. At age 16, he moved to Alberta, Canada in 2010. In that journey, he has learned English and French in addition to his first language, Tagalog/Filipino, and his heritage languages, Ilocano and Kapampangan.

After finishing his BA (Hon) in Anthropology in 2016, he worked in Montréal as an English Language Monitor in oral conversation workshops where, to a smaller degree, he also taught French to francisation students who were new immigrants to Québec.

He completed his MA in Applied Linguistics at Concordia University. His SSHRC-funded MA research investigated the plurilingual competence, practices, and identities of ESL student tutors and tutees at a francophone college in Montreal.

He is currently undertaking his PhD in Educational Studies (Language Acquisition Program) in the Department of Integrated Studies in Education at McGill University. His PhD research interests lie in the intersections and interactions of language (acquisition, use, pedagogy, and policy), culture, and identity — topics that are personally relevant to him as an immigrant language learner and teacher.