Seminar - Therapy of Cystic Fibrosis, when, what target, and how much is enough? 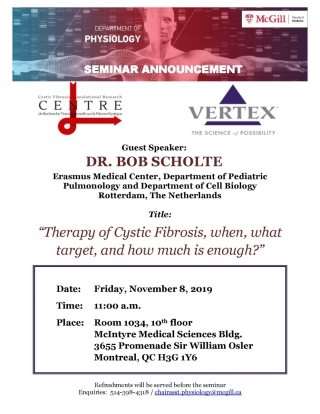 Cystic Fibrosis is a recessive inherited disease, that severely affects more than 80.000 patients worldwide. Mutations in the CFTR gene, encoding a transmembrane protein involved in transcellular chloride transport, cause progressive pathology in pancreas, liver, gut and lung. Despite recent progress in development of CFTR targeted compounds, an effective cure for all patients is not yet available.

When the gene was cloned in 1989, it became clear that correction of CFTR deficiency was the prime objective. The most important target tissue being the airway epithelium and the required correction level some 10% of average normal. This was based on the consideration that known heterozygotes, the parents of CF patients, are healthy, and that mutant variants with partial activity in functional assays cause less or no pathology than inactive forms.

Initially, somatic gene therapy appeared the way forward. However, this required the development of novel technology that is still insufficiently effective. Nevertheless, new developments in stem cell technology and gene editing recently caused a revival of this field. As we learned more about the properties of the mutant CFTR forms that are found in a majority of CF patients (F508del and G551D), screening large compounds libraries for molecules that correct their deficiency became the main approach.

We will discuss the effect of CFTR deficiency, not only on trans-epithelial ion and fluid transport, but in particular on downstream processes that contribute to CF lung inflammation and tissue remodeling. Based on our recent studies in CF infant lung and cell culture models, we consider the contribution of oxidative stress and abnormal lipid metabolism, and whether remission or prevention of pathology can be achieved with partial correction of mutant CFTR activity in all target cells, or by overexpressing normal CFTR in part of the cells. Finally, we will discuss opportunities for alternative or additional therapeutic targets.

This event is part of the Department of Physiology Friday Seminar Series and is sponsored by the Cystic Fibrosis Translational Research Centre. 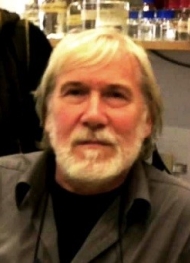