McGill.CA / Alan Edwards Centre for Research on Pain / About Us
Section menu 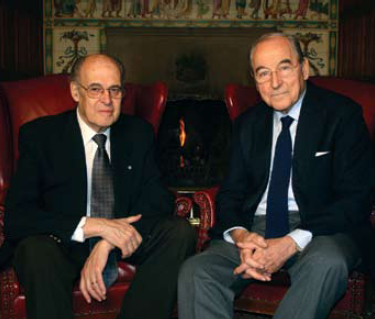 It was in 1965 that Ron Melzack of McGill published with his friend Patrick Wall the gate control theory of pain in Science. This theory focused on chronic pain, postulating that neural gates in the spinal cord can be opened or closed by signals descending from the brain, as well as by sensory information ascending from the body, and highlighted the psychological functions of the brain. This paper was quickly seen to be seminal in the field and produced an explosion of research in labs from around the world that has greatly expanded our knowledge of the subject. The outcomes of this have been numerous new pharmacological and non-pharmacological interventions for the treatment of chronic pain. The gate control theory would also stimulate a shift away from the traditional direct-line pain pathway to the concept of parallel neural networks in the brain associated with the sensory, affective and cognitive dimensions of pain.

Since that time, basic science research on pain mechanisms at McGill has played an important part in University life, and has led to an increasing number of researchers on staff  by last count, some 39 faculty members, from three Faculties and numerous Schools and Departments, are engaged in different aspects of pain research at the University. This research is by no-means restricted to faculty on the main campus; McGill's affiliated hospital research centres play an important role in the Centre's life and interactions between faculty, students and staff from all parts of the broader University are actively promoted by the Centre and its programs such as its annual Pain Day, and monthly events such as the Frontiers in Pain Research lecture series and a regular Journal Club.

Ron, however, has done much more than stimulate the development of a rigorous pain research agenda at the University. Understanding that research had to be driven to clinical application and that the lessons from the clinic had to be fed back to the academic world, he helped establish what is now called the Alan Edwards Pain Management Unit of the McGill University Health Centre in the 1970s. This clinic, patterned after John Bonica's clinic in Seattle, was created as a multi-disciplinary treatment centre for patients whose chronic pain had proven intractable. Fortunately for the clinic, early on Ron met Alan Edwards, a Montreal businessman and philanthropist, whose wife was suffering from intense headaches for which no adequate treatment could be found. Thus both a partnership and friendship was born, and thanks to Ron's scientific leadership and Alan's hard work raising funds to support the clinic, it was quickly to become an important treatment centre for chronic pain patients in Quebec.

In addition to helping Ron develop the MUHC Pain Centre, Alan also became a firm and tireless supporter of pain research at the University, first by endowing a research chair in the Department of Psychology, and later in his generous financial support of the creation of the formal Centre in 2002. His support has allowed the McGill Pain Centre to grow into something truly unusual at the University: a research platform with facilities of its own. The Centre now boasts dedicated behavioural testing rooms, a molecular biology lab, and human testing facilities that are available to all Centre members on a shared time basis. In addition, since 2007, the Centre, through a partnership with the Montreal Neurological Institute, has on-site a 7 Tesla small animal imaging facility that is already producing novel research findings.

Sadly, Alan passed away in 2007. In recognition of his many contributions to pain research at McGill, the Centre was renamed in his honour later that year.