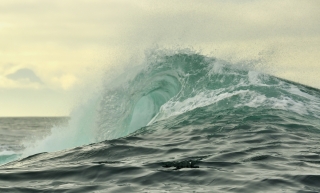 Study reveals how wind patterns change along with sea-surface temperatures

Shifting winds may explain why long-term fluctuations in North Atlantic sea surface temperatures have no apparent influence on Europe’s wintertime temperatures. The findings, published in Nature Communications, could also have implications for how Europe’s climate will evolve amid global warming.

In the mid-1990s, scientists assembled the first century-long record of North Atlantic sea surface temperatures and quickly discovered a cycle of heating and cooling at the surface of the ocean. Each of these phases lasted for decades, even as temperatures warmed overall during the course of the century. Since this discovery, these fluctuations in ocean temperature have been linked to all manner of Northern Hemisphere climate disturbances, from Sahel drought to North Atlantic hurricanes.

Research also linked European climate variability to the temperature swings of its neighboring ocean in the spring, summer and fall. Surprisingly, however, no imprint of the ocean’s variability could be found in Western Europe’s wintertime temperature record. This absence was especially puzzling in light of the fact that Europe’s mild winters are a direct consequence of its enviable location downwind of the North Atlantic.

Now, a study by researchers at McGill University and the University of Rhode Island suggests that the answer to this puzzle lies in the winds themselves. The fluctuations in ocean temperature are accompanied by shifts in the winds. These wind shifts mean that air arrives in Western Europe via very different pathways in decades when the surface of the North Atlantic is warm, compared to decades when it is cool.

The researchers studied the winds and their interaction with the ocean in a recently developed reconstruction of 20th century climate. Their main approach was to launch virtual particles into the winds, and trace their journey for ten key days leading up to their arrival in Western Europe. They repeated this procedure using the wind field for each winter of the last 72 years, a period for which the winds of the North Atlantic have already been carefully documented and validated.

The new research reveals that, in decades in which North Atlantic sea surface temperatures are elevated, winds deliver air to Europe disproportionately from the north.  In contrast, in decades of coolest sea surface temperature, swifter winds extract more heat from the western and central Atlantic before arriving in Europe. The researchers suggest the distinct atmospheric pathways hide the ocean oscillation from Europe in winter.

If, as many climate models suggest, the ocean is a main driver, then this research has implications for the future of European climate. A system of ocean currents, popularly referred to as the “Great Ocean Conveyor,” brings warm waters to the North Atlantic. This current system is predicted to slow down in response to global warming, causing the North Atlantic to cool.

“It is often presumed that the cooler North Atlantic will quickly lead to cooling in Europe, or at least a slowdown in its rate of warming,” says Ayako Yamamoto, a PhD student in McGill’s department of Atmospheric and Oceanic Sciences and lead author of the study. “But our research suggests that the dynamics of the atmosphere might stop this relative cooling from showing up in Europe in winter in the decades following an Atlantic cooling.”

This work was supported by funding from McGill University, the Natural Sciences and Engineering Research Council of Canada, the Fonds de recherche du Québec – Nature et technologies, and Québec-Océan. IMAGE: The map reflects how the winds blowing towards Europe shift with fluctuations in North Atlantic sea-surface temperature. During decades when the sea is cool (associated with blue colors), the prevailing winds are more likely to flow across the Atlantic from North America, keeping western European air temperatures mild. In periods when the ocean surface warms (associated with red), the prevailing winds are more prone to sweep down from the north.  CREDIT: Ayako Yamamoto