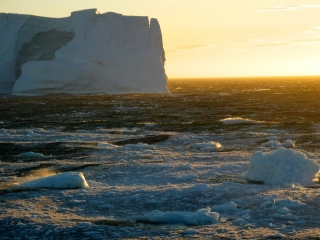 In the mid-1970s, the first available satellite images of Antarctica during the polar winter revealed a huge ice-free region within the ice pack of the Weddell Sea. This ice-free region, or polynya, stayed open for three full winters before it closed.

Subsequent research showed that the opening was maintained as relatively warm waters churned upward from kilometres below the ocean’s surface and released heat from the ocean’s deepest reaches. But the polynya -- which was the size of New Zealand -- has not reappeared in the nearly 40 years since it closed, and scientists have since come to view it as a naturally rare event.

Now, however, a study led by researchers from McGill University suggests a new explanation: The 1970s polynya may have been the last gasp of what was previously a more common feature of the Southern Ocean, and which is now suppressed due to the effects of climate change on ocean salinity.

The McGill researchers, working with colleagues from the University of Pennsylvania, analyzed tens of thousands of measurements made by ships and robotic floats in the ocean around Antarctica over a 60-year period. Their study, published in Nature Climate Change, shows that the ocean’s surface has been steadily getting less salty since the 1950s. This lid of fresh water on top of the ocean prevents mixing with the warm waters underneath. As a result, the deep ocean heat has been unable to get out and melt back the wintertime Antarctic ice pack.

“Deep ocean waters only mix directly to the surface in a few small regions of the global ocean, so this has effectively shut one of the main conduits for deep ocean heat to escape,” says Casimir de Lavergne, a recent graduate of McGill's Master's program in Atmospheric and Oceanic Sciences and lead author of the paper.

The scientists also surveyed the latest generation of climate models, which predict an increase of precipitation in the Southern Ocean as atmospheric carbon dioxide rises. “This agrees with the observations, and fits with a well-accepted principle that a warming planet will see dryer regions become dryer and wetter regions become wetter,” says Jaime Palter, a professor in McGill’s Department of Atmospheric and Oceanic Sciences and co-author of the study. “True to form, the polar Southern Ocean - as a wet place - has indeed become wetter. And in response to the surface ocean freshening, the polynyas simulated by the models also disappeared.” In the real world, the melting of glaciers on Antarctica - not included in the models - has also been adding freshwater to the ocean, possibly strengthening the freshwater lid.

The new work can also help explain a scientific mystery. It has recently been discovered that Antarctic Bottom Water, which fills the deepest layer of the world ocean, has been shrinking over the last few decades. “The new work can provide an explanation for why this is happening,” says study co-author Eric Galbraith, a professor in McGill’s Department of Earth and Planetary Sciences and a fellow of the Canadian Institute for Advanced Research. “The waters exposed in the Weddell polynya became very cold, making them very dense, so that they sunk down to become Antarctic Bottom Water that spread throughout the global ocean. This source of dense water was equal to at least twice the flow of all the rivers of the world combined, but with the surface capped by freshwater, it has been cut off.”

“Although our analysis suggests it’s unlikely, it’s always possible that the giant polynya will manage to reappear in the next century,” Galbraith adds. “If it does, it will release decades-worth of heat and carbon from the deep ocean to the atmosphere in a pulse of warming.”

The research was supported by the Stephen and Anastasia Mysak Graduate Fellowship in Atmospheric and Oceanic Sciences, by the Natural Sciences and Engineering Research Council of Canada (NSERC) Discovery programme, by the Canadian Institute for Advanced Research (CIFAR) and by computing infrastructure provided by the Canadian Foundation for Innovation and Compute Canada.

Link to the study, 'Cessation of deep convection in the open Southern Ocean under anthropogenic climate change':

PHOTO: Iceberg floating in the northern Weddell Sea during summer. A layer of sea ice has blanketed the entire Weddell Sea every winter since the Weddell polynya closed in 1976. CREDIT : Eric Galbraith

SECOND IMAGE: Sea ice (white) surrounds Antarctica in this image based on satellite data from 1974-1976. The dark area in the upper part of the image shows the extent of the Weddell Sea polynya during the polar winters of those years. (Casimir de Lavergne; NSIDC)