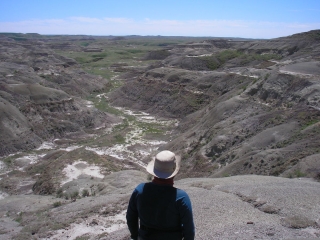 To understand how the mass extinction and associated climate changes affected specific ecosystems, a team of McGill scientists has analyzed the microscopic remains of plants from this period, found in the sediment of rivers in southern Saskatchewan. In a recent article in Palaeogeography, Palaeoclimatology, Palaeoecology they show that in this area, local plant communities and ecosystems experienced a long-term shift towards fewer aquatic plants and an increase in terrestrial plants, including trees such as birches and elms. The researchers speculate that this increase was due to the extinction of large plant-eating dinosaurs. They also found, unexpectedly, that changes in rainfall patterns during the extinction event were relatively minor and short-lived.

“This could be important as we look to the future of global warming, where many scientists have predicted that changes in precipitation could have big impacts on humans and ecosystems,” says Peter Douglas from McGill’s Department of Earth and Planetary Scientists and senior author on the paper. “At other times of major climate change in Earth’s history we typically do see evidence for such changes. The absence of such a signal during the most recent mass extinction event is intriguing.”

Douglas adds, “Surprisingly, scientists know more about what happened in the oceans at the end-Cretaceous extinction than on land. By clarifying the environmental changes occurring during this period, we narrowed down the factors that are likely to have caused the disappearance of dinosaurs. The research also provides an important analogue for environmental changes humans are causing to the planet, and the potential for future mass extinction.”

The research was supported by: NSERC Discovery Grant, funding from the Delise Alison Award which was provided through the Redpath Museum, and the Eric Mountjoy Fellowship.