Professors Myriam Denov and Nathalie Tufenkji receive Killam Research Fellowships, for their outstanding research and commitment to carrying out innovative projects in their field 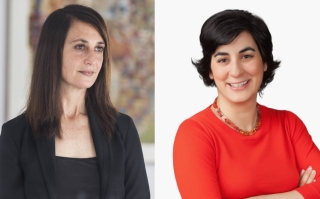 The Canada Council for the Arts recently announced the recipients of the prestigious 2020 Killam Research Fellowship, including two from McGill. Professors Myriam Denov and Nathalie Tufenkji were awarded Killam Research Fellowships in support of their outstanding research excellence and their commitment to pursue trail-blazing projects in their field. In addition to the fellowships, the Council also awarded the Killam Prize to Professor Alan Evans.

Giving a voice to children born of war

Myriam Denov, a Professor at the School of Social Work and Tier 1 Canada Research Chair in Youth, Gender and Armed Conflict, received a 2020 Killam Research Fellowship to focus on continuing her research investigating the perspectives, realities, and psychosocial needs of children born of war in northern Uganda. She is the first social work researcher ever to receive a Killam Research Fellowship in the award’s 50+ year history.

Using qualitative methods, Professor Denov has conducted in-depth interviews with 79 children born of war, 27 mothers who bore children as a result of wartime rape, 21 extended family members, and 81 community members. Uniquely, her study also included the perspectives of 20 former male commanders who fathered children in the context of forced marriage and sexual enslavement. By studying the experiences and perspectives of these five participant groups, Professor Denov’s research has provided a complex, intergenerational and multi-layered portrayal of children born of war in northern Uganda and their surrounding social ecology.

Professor Denov’s project will advance the development and implementation of much needed policies and programs to address wartime sexual violence and its aftermath, providing governments, the UN, NGOs, and human rights advocates with evidence to protect and promote the rights of children born of war. In addition to providing policy guidelines for best practices for these children, Professor Denov will use art and theatre to promote the post-war recovery needs of affected children, families, and communities.

Addressing the global problem of plastic pollution in soil and freshwater

Nathalie Tufenkji, a Professor in the Department of Chemical Engineering and Tier 1 Canada Research Chair in Biocolloids and Surfaces, received a 2020 Killam Research Fellowship to focus on her research to address the global crisis of plastic pollution in soils and freshwater, a crisis that has been mostly ignored compared to marine research.

Professor Tufenkji and her team’s innovative project will be one of the first to evaluate the fate and impacts of microplastics and nanoplastics in terrestrial and freshwater ecosystems in a Northern Canadian context, using advanced analytical imaging technologies to quantify and identify microplastics and nanoplastics in real environments. Their innovative approaches will aim to detect, quantify and characterize levels of plastic pollution in the size range of less than 0.01 mm, which has not been well studied due to a lack of robust methods.

This experimental research project will help scientists learn about the concentration and types of microplastics and nanoplastics that pose a risk to environmental and human health, and to understand if Canadian environments and people are more at risk of microplastic and nanoplastic contamination due to the harsh climate. It also has the potential to provide information needed to design safer plastics while ensuring the well-being of existing and future generations.

About the Killam Program

The Canada Council for the Arts awards Killam Research Fellowships to support outstanding scholars and researchers at Canadian universities and research institutes so they can complete their ground-breaking projects. The Fellowships provide support to the researchers by granting them time to pursue research projects of broad significance and widespread interest within the disciplines of humanities, social sciences, natural sciences, health sciences, engineering and or studies linking any of these disciplines. Each Killam Research Fellow is granted $70,000 a year for two years.

In addition to the Killam Research Fellowships, the Killam Prizes honour eminent Canadian scholars and the outstanding impact of their work on the lives of Canadians and people around the world. They each receive a $100,000 prize. The 2020 Killam Prize in Health Sciences was awarded to Alan Evans, the James McGill Professor of Neurology, Psychiatry and Biomedical Engineering.