The surprising Swiss-Army-knife-like functions of a powerful enzyme

It acts as both a cleaver and a linking tool 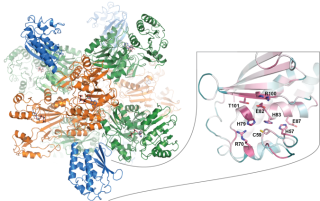 Blue-green algae (AKA cyanobacteria) have a superpower which likely helps them be highly successful as invaders of waterways. They have an extraordinary ability to store energy and nitrogen in their cells for times of need. But how exactly they do so remains only partly understood.

Now researchers from McGill University and their collaborators at ETH Zurich have uncovered an intriguing hitherto unknown ability of the enzymes (known as cyanophycin synthetases) that are active in creating these food reserves. Their findings, described in a recent paper in Nature Communications, are not only scientifically surprizing, but take us a step closer to being able to use these environmentally friendly polymers for everything from bandages to biodegradable antiscalants to animal food.

Enzymes such as cyanophycin synthetases (called polymerase enzymes because they synthesize long chains of polymers) usually require primers in the form of short “starter chains” to start assembling the long chains. Polymerases act as catalysts for a wide range of biological functions, from kickstarting the process of RNA and DNA replication to converting glucose into glycogen as a way of storing energy for later use. Cyanophycin synthetases from many different cyanobacteria were thought to need primers like all the other polymerases, but then the researchers spotted something new.

“We were working with several cyanophycin synthetases and found that one of them didn’t need to be given primer,” says lead author Itai Sharon, a McGill PhD student in Biochemistry. “After three years of experiments, trying to figure out why not, we discovered that this cyanophycin synthetase had a hidden reaction centre within it that cleaves bonds between amino acids, instead of linking amino acids, which is this polymerase’s main job.”

Unlike all known polymerases

The researchers discovered that cyanophycin synthetase could slowly make extremely small numbers of long cyanophycin polymers in absence of primer, which the newly discovered reaction centre cleaves into many short chains that are then used as primers for fast polymerization.

“What makes it even more special is that these polymerases have been studied by many researchers for decades and decades. Nobody, including us, had noticed this before!”