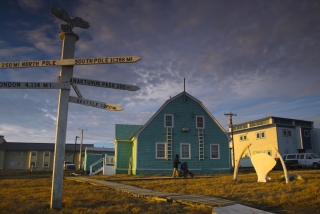 Water scarcity in rural Alaska is not a new problem, but the situation is getting worse with climate change. Lasting solutions must encourage the use of alternative water supplies like rainwater catchment and grey water recycling. They must also address the affordability of water related to household income, say researchers from McGill University.

Washing hands with clean water is something most people take for granted, yet for Alaska's rural residents, this is often not the case. When people pay for water by the gallon, serious thought is given to how much is used – even during the COVID-19 pandemic.

In many rural Alaskan communities, where jobs are scarce and household income is low, the cost of water is a high burden, according to the study published in Environmental Management.

“Households in Anchorage paid nearly five dollars per 1000 gallons in 2017, while residents in more remote areas paid ten times as much,” says co-author Antonia Sohns, a PhD Candidate under the supervision of McGill Professor Jan Adamowski.

Living on less than 6 liters of water a day

“As climate change manifests rapidly across the Arctic, the challenges that households face in securing sufficient water supplies for their daily needs becomes even more difficult,” says Sohns.

Intensifying effects of climate change such as coastal erosion and storm surges are compromising water sources that communities depend on, leading to damaged infrastructure and saltwater intrusion into drinking water.

“Funding should be made available to address climate change impacts to water systems and to support adaptation strategies adopted by communities,” says Adamowski of the Department of Bioresource Engineering.

Water quality, but not quantity?

Currently, there are no water quantity standards, but there are water quality standards. Changes to these regulations could strengthen access to water and improve the health of rural Alaskans.

According to the researchers, part of the solution could lie in promoting household-level approaches and changing how water is provided from conventional pipes to non-conventional systems. This includes increasing funding for alternative water systems, such as rainwater catchment or gray water recycling and reuse.

Although these solutions may not meet potable water standards at the state or federal level, they could significantly improve the quality of life in many communities, they say. Governments should consider reducing burdensome requirements to allow construction of less costly water systems on the way to a fully compliant system.

The researchers also note that infrastructure projects should consider community capacity, belief structure, and local preferences. Inadequate access to water is a persistent challenge in over 200 rural communities, whose residents are primarily Alaska Native people.

“We can’t overlook the importance of different perceptions of water due to cultural preference. Many households continue to gather drinking water from sources that are culturally significant such as rivers, lakes, ice, or snowmelt. In considering such factors, approaches will be more long-lasting and resilient,” says Sohns.