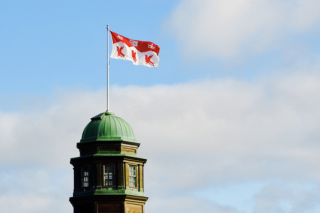 McGill University’s Board of Governors received today recommendations for an ambitious action plan to reduce significantly the carbon footprint of its endowment investments, as part of a report from the Committee to Advise on Matters of Social Responsibility (CAMSR).

In keeping with the University’s Board of Governors’ stewardship role with respect to sustainability, and its ongoing commitment to fighting climate change, CAMSR has recommended a series of actions and timelines – following the Board’s adoption of its report in December of last year – designed to accelerate the University’s responsible decarbonisation of the McGill Investment Pool (MIP), a collection of more than 60 investment mandates and fund investments.

More specifically, CAMSR recommends removing investments from highly carbon intensive companies, in particular those in the fossil fuel industry, cement and steel producers, and coal and gas-fired power plants. This aggressive approach would translate in a 33% reduction of carbon emissions of the University’s endowment listed equity portfolio, relative to the MIP public equities benchmark.

Considering the value of the portfolio as of September 30, 2019, the proposed plan calls for a reduction of its carbon emissions by 38 tons of CO2 per million dollars invested annually, compared to the 18-ton reduction from eliminating investments in the Carbon Underground 200™. This would curtail carbon emissions by more than twice what would be otherwise achieved by eliminating investments in the Carbon Underground 200™ alone. As a point of comparison, this effort would represent the equivalent in carbon emissions of over 300,000 round-trip flights between Montreal and Toronto, or almost four times the emissions generated by McGill community’s air travel in a single year.

Moreover, the proposed plan is also calling for a substantial increase in the portfolio’s impact investments by committing over $75 million of the MIP to renewable energy, clean technologies, energy efficiency, green building, pollution prevention, sustainable water and other low-carbon funds.

The Board will consider the action plan for approval at its April 23, 2020 meeting.

McGill’s Board of Governors, the University’s highest governing body, recognizes the severity of climate change, and the importance of taking meaningful action to help society transition to more sustainable and environmentally conscious practices.

Decarbonisation:
Reducing the carbon footprint of the MIP listed equity portfolio by 33% relative to the MIP public equities benchmark. This decarbonisation would lead to removing investments from highly carbon intensive companies, in particular those in the fossil fuel industry, cement and steel producers, and coal and gas-fired power plants. Considering the value of the portfolio as of September 30, 2019, this approach is expected to reduce the portfolio’s carbon emissions by 38 tons of CO2 per million dollars invested annually. The majority of this sustained reduction is to be achieved in the first two years of implementation, with the balance completed by 2025.

Impact investing:
The University would commit over $75 million by 2025 to renewable energy, clean technologies, energy efficiency, green building, pollution prevention, sustainable water and other low-carbon funds. This would represent 5% of the MIP invested in low-carbon funds and funds that contribute to decarbonisation of the MIP.

Screening:
Within two years, the University would propose a target allocation for increasing the amounts invested in the fossil-fuel-free fund, and an appropriate mechanism for implementation.

Engagement:
The Investment Committee would continue to increase the number of University fund managers who adhere to an environmental, social and corporate governance (ESG) policy and/or are signatories of the United Nations’ Principles for Responsible Investment (UNPRI). Currently, 93% of the University’s assets managed by investment managers meet this criterion, from just above 70% in 2016.

ESG integration:
The Office of Investments would propose amendments to the Statement of Investment Policy, including modifying the Investment Objective section to consider ESG commitments.

Annual reporting:
Beginning in spring 2021, the Investment Committee would submit an annual socially responsible investing (SRI) report to CAMSR and the Board on the percentage of assets managed by managers who are signatories of the UNPRI and/or have an ESG policy, the MIP carbon emission absolute and relative measures, the impact investment exposure, and other initiatives relevant to SRI activities related to the MIP.

SRI review:
Beginning in spring 2025, the Board would review the current SRI practices on a five-year basis in order to determine the need for any adjustments or further SRI actions.

Institutional leadership:
The University would commit to furthering its leadership role in evaluating and promoting, in collaboration with its peer U15 universities, policies and best practices in the area of SRI.

Since 2016, the University has made significant progress in advancing sustainability as a key priority. Adopting a more carbon-conscious investment approach complements McGill’s far-reaching climate change and sustainability goals, including institution-wide efforts to achieve carbon neutrality across the University’s operations by 2040.

About McGill University
Founded in 1821, McGill University is home to exceptional students, faculty, and staff from across Canada and around the world. It is consistently ranked as one of the top universities, both nationally and internationally. It is a world-renowned institution of higher learning with research activities spanning two campuses, 11 faculties, 13 professional schools, 300 programs of study and over 40,000 students, including more than 10,200 graduate students. McGill’s commitment to sustainability reaches back several decades and spans scales from local to global. The sustainability declarations that the University has signed affirm McGill’s role in helping to shape a future where people and the planet can flourish.