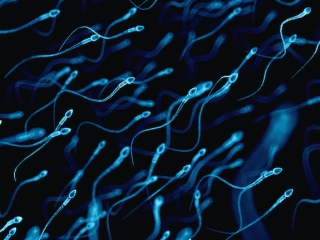 It has long been understood that a parent’s DNA is the principal determinant of health and disease in offspring. Yet inheritance via DNA is only part of the story; a father’s lifestyle such as diet, being overweight and stress levels have been linked to health consequences for his offspring. This occurs through the epigenome - heritable biochemical marks associated with the DNA and proteins that bind it. But how the information is transmitted at fertilization along with the exact mechanisms and molecules in sperm that are involved in this process has been unclear until now.

A new study from McGill, published recently in Developmental Cell, has made a significant advance in the field by identifying how environmental information is transmitted by non-DNA molecules in the sperm. It is a discovery that advances scientific understanding of the heredity of paternal life experiences and potentially opens new avenues for studying disease transmission and prevention.

A paradigm shift in understanding of heredity

“The big breakthrough with this study is that it has identified a non-DNA based means by which sperm remember a father’s environment (diet) and transmit that information to the embryo,” says Sarah Kimmins, PhD, the senior author on the study and the Canada Research Chair in Epigenetics, Reproduction and Development. The paper builds on 15 years of research from her group. “It is remarkable, as it presents a major shift from what is known about heritability and disease from being solely DNA-based, to one that now includes sperm proteins. This study opens the door to the possibility that the key to understanding and preventing certain diseases could involve proteins in sperm.”

“When we first started seeing the results, it was exciting, because no one has been able to track how those heritable environmental signatures are transmitted from the sperm to the embryo before,” adds PhD candidate Ariane Lismer, the first author on the paper. “It was especially rewarding because it was very challenging to work at the molecular level of the embryo, just because you have so few cells available for epigenomic analysis. It is only thanks to new technology and epigenetic tools that we were able to arrive at these results.”

To determine how information that affects development gets passed on to embryos, the researchers manipulated the sperm epigenome by feeding male mice a folate deficient diet and then tracing the effects on particular groups of molecules in proteins associated with DNA.

They found that diet-induced changes to a certain group of molecules (methyl groups), associated with histone proteins, (which are critical in packing DNA into cells), led to alterations in gene expression in embryos and birth defects of the spine and skull. What was remarkable was that the changes to the methyl groups on the histones in sperm were transmitted at fertilization and remained in the developing embryo.

“Our next steps will be to determine if these harmful changes induced in the sperm proteins (histones) can be repaired. We have exciting new work that suggest that this is indeed the case,” adds Kimmins. “The hope offered by this work is that by expanding our understanding of what is inherited beyond just the DNA, there are now potentially new avenues for disease prevention which will lead to healthier children and adults.”