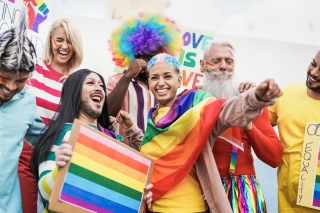 June is Pride Month in Canada. It is a time when we celebrate diversity and LGBTQ+ communities, acknowledge their history, the hardships they have endured, and the progress that has been made. (CBC News)

“Pride is a riot, a celebration of queer resilience, and an homage to the creativity of LGBTQ+ folks. It is the perfect occasion to not only fight against discrimination and violence, but also to reflect upon the contributions of trans, racialized, indigenous community members – who have always been at the forefront of our collective histories.”

Antoine Damiens is a Postdoctoral Fellow in the Department of English and the Institute for Gender, Sexuality, and Feminist Studies. His research focuses on the history of queer cinema and the politics of queer cultural organizing.

“It is not uncommon to hear community members say that Pride celebrations are becoming obsolete as the LGBTQ+ community in Canada has been enjoying the equal rights and freedoms for many years. While it is true that the community has made huge strides in its fight for equality and acceptance, the fight is far from being over. It is important to remember that the community is not homogenous but rather diverse. As a result, a lot of oppressive patterns and hierarchies are still often represented within it, where members get discriminated against based on their race, ethnicity, gender identity, age, body type, and socio-economic status. Furthermore, Pride celebrations build awareness and solidarity with queer people in the countries where being LGBTQ+ is still illegal and punishable by death penalty, and this will continue to be instrumental in the fight for human rights until such atrocities cease to exist.”

“Accepting one’s authentic self is an important element in everyone’s mental health. Pride Month bolsters the dignity and self-respect of the LGBTQ+ community against the homophobia and transphobia that try to shame us.”

Richard Montoro is an Associate Professor in the Department of Psychiatry and the co-director of the McGill University Sexual Identity Centre. His expertise is in ER and LGBTQ+ psychiatry.

“Pride is a time to recognize and celebrate those individuals who helped us gain the rights that we currently enjoy. It is an opportunity for our community to be seen as one, united and proud of who we are, so that members of the community, for instance young people who may feel like they are alone in their struggle, can start to feel more confident in themselves and move out from under the dark cloud that is self-doubt. We stand together as a force against hatred, prejudice, and biases, protecting each other from physical and emotional harm. Nonetheless, we must expect and demand respect from our fellow citizens and others throughout the world.”

Pierre-Paul Tellier is an Associate Professor in the Department of Family Medicine and served as the Director of Student Health at McGill University for more than 30 years before stepping down in 2015. An expert in adolescent medicine and LGBTQ+ health issues, he is the co-convener of a new special interest group on adolescent health for the World Organization of Family Doctors.

“Pride is at its best when it remembers its political and activist roots.”

Alanna Thain is an Associate Professor in the Department of English and the director of the Moving Image Research Laboratory. Her expertise includes cultural studies, world cinemas and gender, sexuality and feminist studies.