Experts: Ex-cop guilty of murder and manslaughter in death of George Floyd 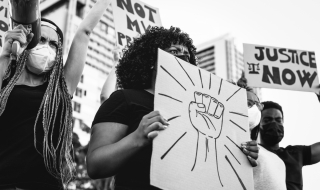 A former Minneapolis police officer was convicted Tuesday of murder and manslaughter for pinning George Floyd to the pavement with his knee on the Black man's neck in a case that triggered worldwide protests, violence and a furious reexamination of racism and policing in the U.S. (CTV News)

“Whether the president of the United States is a Democrat or Republican, white or Black, man or woman, police will continue to kill Black people, especially Black boys and men, at an alarming rate. There are no grounds for optimism in policing as an institution in a society predicated on white domination and Black subordination and subjugation.”

"While I am delighted at the verdict, I am under no illusions that this changes the relationship between black citizens and police. Police reform is necessary, especially in the area of de-escalation."

Myrna Lashley is an Assistant Professor in the Department of Psychiatry and an Adjunct Researcher at the Lady Davis Institute for Medical Research of the Jewish General Hospital. She is the Chair of the Cross-Cultural Roundtable on Security, as well as Vice-chair of the board of the École Nationale de Police du Québec. Her current research interests are in cultural aspects of youth mental health, and cultural aspects of radicalization leading to violence.