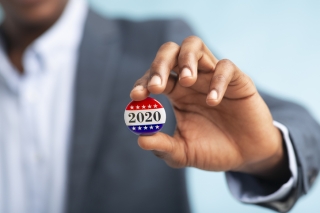 “The 2020 US presidential election is far more consequential than academics, surrogates, and pundits have inferred. The United States is headed towards a precipice, regardless of which party wins, because the sectional/sectarian divides are widening by the day.”

“Canada-US relations have faced daunting challenges since the beginning of the Trump presidency and many Canadians are following very closely the current US presidential campaign a simple reason: because its outcome truly matters for Canada.”

“The upcoming presidential election is symptomatic of deeper crises facing the US political system. On the Republican side, the pathology is obvious, as Donald Trump has transformed the party into a vehicle for his private enrichment while stoking white nationalism and feeding absurd conspiracy theories. But on the Democratic side, it is also telling that in the year of the resurgence of the Black Lives Matter movement, at a time when young leaders are coming to the fore and calls for social justice are growing louder, the party has put forth as its standard-bearers a septuagenarian with an affinity for racist gaffes and a history of favouring big business and “tough on crime” policies, paired with a former prosecutor. Regardless of the outcome on November 3rd, it is unlikely that this deeper crisis of political representation will be resolved. If Trump wins or follows through on his refusal to allow a peaceful transition of power, a new wave of protests is virtually certain. A Biden victory is also unlikely to be willing or able to address the scope of demands that social justice movements and communities ravaged by coronavirus are raising. Meanwhile, Trump’s supporters are unlikely to fade into the woodwork if he loses. The coming months are poised to be both incredibly uncertain and consequential.”

“America stands far more polarized than other Western democracies. Its intense polarization has old roots. They have not only shaped a striking factual divide, but also conflicting views over issues like the basic role of government, wealth inequality, gender, religion, race, guns, criminal justice, foreign policy, and beyond. Many of these divides are interrelated.”

“Democrats seem poised to take back the White House and probably the Senate while expanding their majority in the House, in a historic repudiation of Donald Trump's presidency. However, the damage Trump has done to American standing in the world, to the rule of law, to constitutional norms, and to the Republican Party will be difficult to undo, and even if he loses, the long transition period in the US means he could still do more harm before he leaves office.”

“If we put aside all the sound and fury of the past several months, the race is remarkably stable. From the outset, Joe Biden has had a modest lead over Donald Trump. The only change since September has been that Biden's lead has grown, mostly because of Trump's objectively awful handling of the pandemic but also due to the cumulative effect of several stories (The Atlantic piece on Trump's contempt for veterans; The New York Times release of his tax records, etc.). Finally, the COVID-19 outbreak in the White House has deepened the sense among many ‘middle-of-the-road’ voters that America simply requires a return to political normalcy, which Biden embodies. Hence, Biden is likely headed for a decisive win, and only a coordinated and probably violent coup by Trump and his supporters could stop it.”

“The outcome of the popular vote is highly skewed towards Joe Biden, but this says little about what will take place in the days following the election. One striking point is how Democrats themselves seem to agree that they need to win by a sizeable margin to win – not a good sign in a democracy. Even if Biden wins and we see a peaceful transfer of power, this does not mean that the country will go back to where it was in 2016. We can expect to see a different tone from a Biden administration, but it will still have to deal with the same level of polarization, and many of the trends that put Donald Trump in power will likely remain. Moreover, a Biden administration may have a similarly hostile stance towards China and skepticism towards trade openness.”

Krzysztof Pelc is an Associate Professor and William Dawson Scholar in the Department of Political Science. His research examines the international political economy, with a focus on international rules.