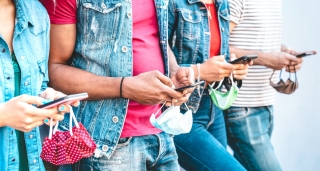 In a study published in Misinformation Review, researchers looked at the behavioural effects of exposure to misinformation by combining social media analysis, news analysis, and survey research. They combed through millions of tweets, thousands of news articles, and the results of a nationally representative survey of Canadians to answer three questions: How prevalent is COVID-19 misinformation on social media and in traditional news media? Does it contribute to misperceptions about COVID-19? And does it affect behaviour?

“Platforms like Twitter and Facebook are increasingly becoming the primary sources of news and misinformation for Canadians and people around the world. In the context of a crisis like COVID-19, however, there is good reason to be concerned about the role that the consumption of social media is playing in boosting misperceptions,” says co-author Aengus Bridgman, a PhD Candidate in Political Science at McGill University under the supervision of Dietlind Stolle.

Results showed that, compared to traditional news media, false or inaccurate information about COVID-19 is circulated more on social media platforms like Twitter. The researchers point to a big difference in the behaviours and attitudes of people who get their news from social media versus news media – even after taking into account demographics as well as factors like scientific literacy and socio-economic differences. Canadians who regularly consume social media are less likely to observe social distancing and to perceive COVID-19 as a threat, while the opposite is true for people that get their information from news media.

“There is growing evidence that misinformation circulating on social media poses public health risks,” says co-author Taylor Owen, an Associate Professor at the Max Bell School of Public Policy at McGill University. “This makes it even more important for policy makers and social media platforms to flatten the curve of misinformation.”

“The causes and consequences of COVID-19 misperceptions: Understanding the role of news and social media” by Aengus Bridgman, Eric Merkley, Peter John Loewen, Taylor Owen, Derek Ruths, Lisa Teichmann, and Oleg Zhilin of the Media Ecosystem Observatory (MEO) is published in Misinformation Review. The project was funded through the Department of Canadian Heritage’s Digital Citizens Initiative. The objective of MEO is to better understand the online harms and digital threats to democracy, and to safeguard against it. The Principal Investigators of MEO are Peter Loewen, Taylor Owen, and Derek Ruths.