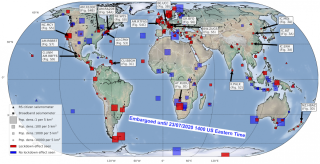 Research published in the journal Science has shown that lockdown measures to combat the spread of COVID-19 led to a 50% reduction in seismic noise observed around the world in early to mid 2020.

By analyzing months-to-year-long datasets from over 300 seismic stations around the world, the study was able to show seismic noise reduced in many countries and regions, making it possible to visualize the resulting “wave” moving through China, then to Italy, and around the rest of the world. The seismic lockdown sees the total effect of physical/social distancing measures, reduced economic and industrial activity and drops in tourism and travel. This quiet period is the longest and most prominent global anthropogenic seismic noise reduction on record.

The study was spawned after Thomas Lecocq, a geologist at the Royal Observatory of Belgium and lead author of the new study, decided that the best way to tackle the problem of analyzing data from all around the globe was to share his method with the seismological community. This started a unique collaboration involving 76 authors from 66 institutions in 27 countries, including William Minarik a lecturer in McGill’s Department of Earth and Planetary Sciences.

The environmental effects of the pandemic lockdowns are wide and varied, including reduced emissions in the atmosphere and reduced traffic and noise pollution impacting wildlife. This new study is the first global study of the impact of this quiet period – coined the anthropause - on the solid Earth beneath our feet.

The study has shown the first evidence that previously concealed earthquake signals, especially during the daytime, appeared much clearer on seismic sensors in urban areas during lockdown. Minarik was able to use data from sensors located in Montreal, Toronto and Vancouver to show quieting similar to that observed by his colleagues throughout the world.

“Usually, seismometers are located in remote, rural areas to avoid this urban noise, and these show only minimal effects of the COVID-19 lockdown. Fortunately, Montreal has a broadband station run by the Canadian National Seismograph which distinctly shows this quieting coinciding with the start of the lockdown,” says Minarik.

The paper also lists areas where no quieting was found. In data from Edmonton, Calgary, Sudbury and Victoria, Minarik was unable to show quieting, either because sensors were located near a part of the city where the noise did not change or because of provincial variations in the severity of the lockdown.

Traditionally, seismology focuses on measuring seismic waves arising after earthquakes. Seismic records from natural sources, however, are contaminated by high-frequency vibrations (“buzz”) from humans at the surface - walking around, driving cars, and getting the train all create unique seismic signatures in the subsurface. Heavy industry and construction work also generate seismic waves that are recorded on seismometers.

The 2020 drop in the anthropogenic “buzz” has been unprecedented. The study shows that the strongest seismic noise reductions were found in urban areas, but the authors also noticed the lockdown signatures on sensors buried hundreds of metres into the ground and in more remote areas, such as in Sub-Saharan Africa.

There have been a number of reports of the economic and social slowdown associated with the COVID-19 lockdown, however, many of these have raised privacy concerns because they are based on mobility indices derived from tracking cell phones or web searches.

Lecocq and his collaborators were able to use their seismic noise data to develop a new method for quantifying urban mobility, an approach that provides anonymous information with a reduced risk of privacy violations when compared to cell phone-based methods.

With growing urbanization and increasing populations globally, more people will be living in geologically hazardous areas, making it increasingly important to characterize the anthropogenic noise humans cause so that seismologists can better listen to the Earth, especially in cities, and monitor the ground movements beneath our feet.

The authors hope the new study will spawn further research on the seismic lockdown, with one key aim to be the detection of previously hidden signals from earthquakes and volcanoes.