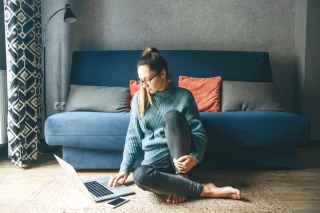 Around the world increasing mental health inequalities between women and men following the COVID-19 pandemic represent a major public health concern. According to a new study, the lockdown measures due to the pandemic profoundly and unequally disrupted the work-family balance for many graduate students, exacerbating mental health problems.

The study, published in Preventive Medicine Report, is one of the first to document gendered stressors and the role of work-family conflict in the context of a pandemic. The study was led by researchers from McGill University, Université de Montréal, and Université du Québec à Chicoutimi.

“Mental health problems are particularly high among graduate students and our research suggests that the pandemic may have exacerbated these issues and some gendered inequalities,” says lead author Jaunathan Bilodeau, a Postdoctoral Researcher in the Department of Sociology under the supervision of Professor Amélie Quesnel-Vallée, the Canada Research Chair in Policies and Health Inequalities at McGill University.

Higher education was hit hard by lockdown measures in Canada due to COVID-19. Universities and colleges closed their doors, requiring both instructors and students to work from home.

The study shows that the COVID-19 lockdown measures were not gender neutral. For example, women reported more stress related to adapting to new remote teaching methods. This was associated with more depressive symptoms, not only directly, but also indirectly through work interfering with family. Women were also more worried about COVID-19.

The difference between women and men, according to the researchers, could be linked to attitudes toward risk and the care responsibilities generated by the pandemic. “Considering that many women in our survey had a close contact who contracted COVID-19, the mental load or caregiving linked to this concern could have had an unfavorable effect on the ability to reconcile work and family responsibilities among women,” says Bilodeau.

Although women were more worried, they reported more emotional support than men. “Our study highlights the deleterious consequences of the lockdown on men's mental health as well. It invites us to think of mental health through the lens of greatest exposure to specific stressors and lack of resources among men,” says Amélie Quesnel-Vallée. The study’s findings were consistent with other reports identifying lower emotional support among men in Quebec.

The study also shows that men struggled more often with family interfering with work. “A possible explanation could lie in gendered management of boundaries between work and family before and during the pandemic. Before the pandemic, men may have had more segmented family and work roles. When the physical boundary between family and work was effectively abolished by containment, this segmentation may have been more difficult to maintain, contributing to more perceived conflicts between family and work.” says Bilodeau.

Graduate students aspiring to an academic career are at increased risks of work-family conflict generally, as they seek to establish research and publication records in a highly competitive environment while also often being demographically in the early stages of family building, say Quesnel-Vallée. Being in a relationship, having children, being stressed about new teaching methods, and worrying about COVID-19 were all linked to more work-family conflict.

“Our study identifies action levers aimed at mitigating mental health inequalities among graduate students by adapting and extending support for those working from home. These include proactive mental health supports and policies for reconciling work and family,” says co-author Nancy Beauregard, a Professor at the School of Industrial Relations of Université de Montréal. Governments and universities should consider these factors to reduce the risk of depressive symptoms and mental health inequalities during the pandemic, the researchers say.