Americans are super-spreaders of COVID-19 misinformation

The US ‘infodemic’ has spread to Canada, fuelled by social media 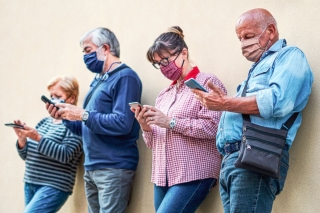 Misinformation about COVID-19 is spreading from the United States into Canada, undermining efforts to mitigate the pandemic. A study led by McGill University shows that Canadians who use social media are more likely to consume this misinformation, embrace false beliefs about COVID-19, and subsequently spread them.

Many Canadians believe conspiracy theories, poorly-sourced medical advice, and information trivializing the virus—even though news outlets and political leaders in the country have generally focused on providing reliable scientific information. How then, is misinformation spreading so rapidly?

“A lot of Canadians are struggling to understand COVID-19 denialism and anti-vaccination attitudes among their loved ones,” says lead author Aengus Bridgman, a PhD Candidate in Political Science at McGill University under the supervision of Dietlind Stolle. According to the study, published in Frontiers in Political Science, these attitudes are partially the result of massive Canadian consumption of information from the United States.

The researchers analyzed the behaviours of the 200,000 most active Canadian Twitter users and conducted surveys on news consumption habits and COVID-19 beliefs of Canadians. They found that those who use social media are relatively more exposed to US-based information than domestic sources of information, and that exposure to US news outlets was associated with misperceptions about COVID-19.

They also found that most of the misinformation circulating on Twitter shared by Canadians was retweeted from US sources. Canadians who followed more American users were more likely to post misinformation.

Canada is not immune to the American infodemic

While there has been a Canadian cross-partisan consensus on battling COVID-19, the political climate in the United States is very different. South of the border there is intense polarization over the severity of the pandemic, with misinformation being reinforced by American media and political figures alike.

Information circulating in the United States also deeply impacts Canadians, for better or worse. This is especially true in social media spaces, where Canadians are among the heaviest users – one out of two are on Instagram, five out of six are on Facebook, and two out of five are on Twitter. Moreover, Canadians pay special attention to American media. “On average, they follow three times as many Americans as they do Canadians on Twitter, and retweet them eight times more often,” says co-author Taylor Owen, an Associate Professor at the Max Bell School of Public Policy at McGill University.

According to the researchers, this influence produces a troubling vulnerability for Canada during the pandemic. “It’s hard for Canadian journalists, scientists and public health experts to be heard by the average Canadian, given all the noise generated by American sources,” says Bridgman. “Countries with journalists and political leaders that don’t indulge conspiracy theories or profess anti-science views are simply not immune to dangerous infodemics.”

Although many Canadians choose to consume news from the US, social media platforms likely play a key role in deepening this interest, say the researchers.

Not only do their algorithms saturate information streams with American news, they also propagate false news much faster than factual news. By privileging content that draws emotional responses from users, the algorithms help spread misinformation like wildfire.

Governments wishing to limit the spread of infodemics should consider the ways that social media platforms push out-of-country information to the top of news feeds. “This infodemic has the capacity to change important attitudes and behaviours that influence transmission patterns of COVID-19. Ultimately, it can change the scale and lethality of a pandemic,” says Owen.