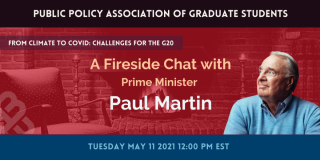 This event is exclusively for Max Bell School MPP students and faculty.

In this event organised by Public Policy Association of Graduate Students (PPAGS), The Right Honourable Paul Martin joins the School for a fireside chat.

The Right Honourable Paul Martin was Prime Minister of Canada from 2003 to 2006.

As Prime Minister, he set in place a ten year plan to improve health care and reduce wait times. He also signed agreements with the provinces and territories to establish the first national early learning and child care program.  Under Mr. Martin’s leadership, following an 18 month consultation process involving Canada’s provinces, territories, First Nations, the Metis Nation, and Inuit leaders, the Federal government reached a historic consensus with the 2005 Kelowna Accord to eliminate funding gaps in health, education, housing, and clean water for Indigenous people.

He was Minister of Finance from 1993 to 2002,  where he erased Canada’s deficit and recorded five consecutive budget surpluses while paying down the national debt and setting Canada’s
debt-to-GDP ratio on a steady downward track.   He was a Member of Parliament for the riding of Lasalle-Émard from 1988 to 2008.

In 1999, as co-founder of the G20 Finance Ministers and Central Bank Governors, he served as its inaugural chair and continued in that position for 3 years.

After leaving public life, Mr. Martin advised the African Development Bank and worked closely with the Advisory Council of the Coalition for Dialogue on Africa. He was also a founding co-chair of the Congo Basin Forest Fund and a Commissioner of the Global Ocean Commission.

In 2008, along with his family he founded the Martin Family Initiative (MFI) a charitable organization committed to improving education, health, and the overall well-being of Indigenous children and youth in Canada. Since its inception MFI has sought to walk the path with Indigenous schools and communities as they define their priorities and goals, bridging the gap between community needs and available resources. MFI does so based on its founding principle that every community and school should have the tools available to them to provide their young with every opportunity possible.

To this end, MFI gathers the most relevant expertise coupled with community-based knowledge to co-develop, support, and implement innovative programming and networks that follow  Indigenous ways of knowing.

In 2012, he was appointed Companion to the Order of Canada.

He is married to Sheila Ann Cowan and they have three sons and five grandchildren.