The Competition and Growth Summit 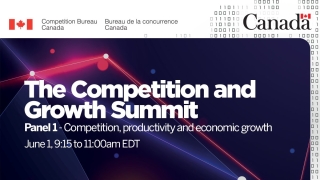 As COVID-19 restrictions begin to ease and the economy continues on its path to recovery, the Competition Bureau of Canada is hosting a summit on the importance of competitive markets. Hear from Max Bell School director Chris Ragan, who will be speaking on the first panel of the conference.

Chris Ragan is a Canadian academic and economist. He is best known for his research on monetary policy, and for his popular introductory textbook, Economics, now in its fourteenth edition and co-authored by Richard Lipsey.

He is an Associate Professor at McGill University, where he has been on the faculty since 1989. Throughout his tenure, he has taught a wide range of economics courses, both at the undergraduate and graduate levels. In 2007, he became the first in the Faculty of Economics to receive the H. Noel Fieldhouse teaching award for excellence in teaching.

His research and academic writing is largely focused on Canadian public policy challenges, and since 2007, the policy responses to the financial crisis of 2007-2009.

Previously, he was Chair of Canada's Ecofiscal Commission, a group of Canadian economists seeking to broaden the discussion of environmental pricing reform beyond the academic sphere and into the realm of practical policy application. From 2010 to 2013, Ragan held the David Dodge Chair in Monetary Policy at the C.D. Howe Institute, a Toronto-based public policy think tank. Previously, he served as the Clifford Clark Visiting Economist at the Department of Finance, a Special Advisor to the Governor of the Bank of Canada, and member of the C.D. Howe Institute's Monetary Policy Council. From 1996 to 2000, he was Editor-in-Chief of World Economic Affairs.