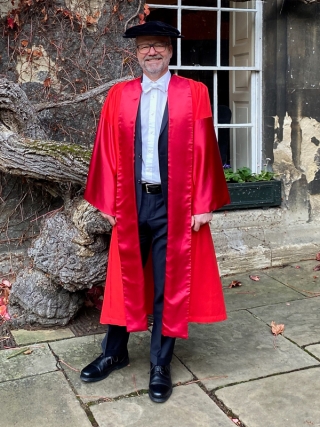 The Faculty of Law is pleased to announce that, at a ceremony on 26 November, the University of Oxford awarded Professor Lionel Smith a higher doctorate, the Doctor of Civil Law (DCL).

Higher doctorates are earned awards that recognize excellence in published scholarship. Two independent judges concluded that Professor Smith’s work met the required standards, characterizing it as ”of global reach and importance” and ”of the absolute highest quality.”

Professor Smith was reappointed as Sir William C. Macdonald Chair in May for a second seven-year term. He is a former director of the Paul-André Crépeau Centre for Private and Comparative Law and a titular member of the International Academy of Comparative Law. He is also a member of the American Law Institute, the European Law Institute, and the International Academy of Estate and Trust Law. In 2017, he was appointed visiting professor at the University of Oxford’s Faculty of Law.

In March 2014, Professor Smith was selected for a Killam Research Fellowship in recognition of his outstanding research on fiduciary obligations and conflicts of interest.

Professor Smith is interested in all aspects of fundamental comparative private law. He is particularly engaged with private law’s understandings of aspects of unselfish behaviour. He has an active research agenda bearing on trusts, fiduciary obligations, gifts, and unjust enrichment, in the civil law and common law. His monograph The Law of Loyalty is forthcoming from Oxford University Press.

“I am thrilled to see Professor Smith’s exceptional contributions recognized with this higher doctorate,” said Dean Robert Leckey. “Our colleague, whose scholarship is characterized by its sustained quality, global reach, and contribution to the law’s development, contributes greatly to McGill Law’s leadership in private and comparative law.”