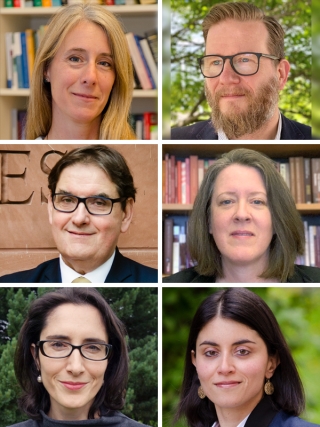 The Faculty of Law is pleased to announce six of its members are among the successful candidates in the recent elections of the International Academy of Comparative Law (IACL). Professors Helge Dedek and Geneviève Saumier have been elected as titular members. Professors Allison Christians, Alicia Hinarejos and Marie Manikis, in addition to Me Daniel Boyer, Ad. E., have been elected as associate members.

Helge Dedek is an expert in the areas of comparative and transnational legal history, comparative law, private law, and legal theory. He joined the Faculty of Law in 2006 as a Boulton Fellow and was promoted to full professor in 2021. Professor Dedek is the co-editor in chief of the American Journal of Comparative Law. He previously served as director of the Faculty’s Institute of Comparative Law from 2012 to 2016. In 2021, he received the John W. Durnford Award for Teaching Excellence.

Geneviève Saumier has been the Peter M. Laing, Q.C., Professor of Law since 2016. Her research focuses on consumer law, the resolution of international disputes, and cross-border class actions. Her papers on private international law and on consumer arbitration have been cited many times by the Supreme Court of Canada. Professor Saumier was awarded the Paul-André-Crépeau Medal by the Quebec Branch of the Canadian Bar Association in 2016. In 2020, she was appointed a Norton Rose Fulbright Faculty Scholar.

Daniel Boyer, Ad. E., Wainwright Librarian and Head of the Nahum Gelber Law Library, holds degrees in history, law, and library sciences. He is a past director of the Société québécoise d'information juridique and the International Association of Law Libraries. In addition to his publications and conference presentations on comparative law, he has acted as a consultant for other law libraries, notably in Switzerland and Vietnam. Me Boyer received the Advocatus Emeritus title from the Barreau du Québec in 2018.

Allison Christians is associate dean (research) and the H. Heward Stikeman Chair in the Law of Taxation. Her research and teaching focus on national and international tax law and policy issues. In 2014, she received the John W. Durnford Prize for Teaching Excellence and, in 2018, the Principal’s Prize for Excellence in Teaching. Professor Christians was named among the International Tax Review’s "Global Tax 50" in 2015, 2016 and 2020, and in 2018 was identified by Economia as one of the top 50 most influential sources of finance news and information in social media.

Alicia Hinarejos is an expert in the field of European Union law and comparative public law, notably of the evolution of the EU’s Economic and Monetary Union and its consequences for the EU’s constitutional order. Her scholarship has been cited in the most significant judicial decisions in this area in recent years, both by the Court of Justice of the European Union and by the German Federal Constitutional Court. Professor Hinarejos is joint Editor of the European Law Review. She is co-editing a volume on EU fiscal federalism, to be published by OUP in 2021.

Marie Manikis is a William Dawson Scholar researching in the areas of criminal justice, sentencing, and criminal law and procedure. She is a member of the Centre for Human Rights and Legal Pluralism and the International Centre for Comparative Criminology. She has received several awards and prizes for her scholarship, including the Faculty’s Research Merit Award (2017), the Fondation du Barreau du Quebec’s award for best article (2018), and the Principal’s Prize for Outstanding Emerging Researchers (2019).

“This is exceptionally good news for these colleagues and for the Faculty of Law,” said Dean Robert Leckey. “These results confirm our standing at the forefront of comparative law in Canada and internationally.”

About the International Academy of Comparative Law

The IACL, founded in 1924 in The Hague, is a body of scholars focusing on the comparative study of legal systems and the fostering of research in comparative law throughout the world. The IACL has more than 700 members worldwide, with 13 members based at McGill Law.