ReOrienting the Global Study of Religion 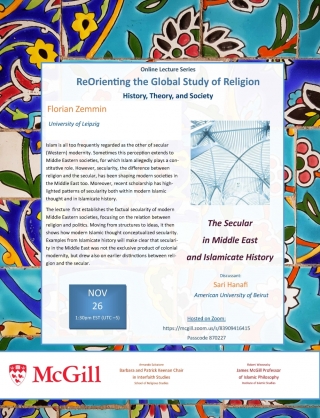 The Secular in Middle East and Islamicate History

The Keenan Chair of Interfaith Studies and the James McGill Professor of Islamic Philosophy are collaborating in a reflection on religion, Islam, and cosmopolitanism associated with McGill’s academic tradition of Islamic Studies, and epitomized by scholars such as Wilfred Cantwell Smith, Fazlur Rahman, and Toshihiko Izutsu. In preparation for the Keenan Conference on World Religions and Globalization, to be held in Montreal in Spring 2022, we are hosting an online lecture series titled ReOrienting the Global Study of Religion: History, Theory, and Society.

While the study of the Islamosphere has stimulated a critical reconceptualization of the notion of religion, we would like to extend this reflection to how religious concepts have been embedded in broader views of history and society, including the Western colonial construction of the “Middle East” as the cradle not just of Islam but of all Abrahamic religions. Some of the lectures will contribute to such reflections also through the foil of the interdisciplinary legacy of Ibn Khaldun, a champion of non-Western thought and precursor of social theory.

The second speaker in the series will be Florian Zemmin, Leipzig University. The title of the lecture, which will be followed by a Q&A, is The Secular in Middle East and Islamicate History. The lecture is based on a chapter that Dr Zemmin is contributing to The Oxford Handbook of the Sociology of the Middle East in course of publication (both online and in print) with Oxford University Press, edited by Armando Salvatore, Sari Hanafi, and Kieko Obuse. Sari Hanafi will serve as a discussant of the lecture.

Abstract: Islam is all too frequently regarded as the other of secular (Western) modernity. Sometimes this perception extends to Middle Eastern societies, for which Islam allegedly plays a constitutive role. However, secularity, the difference between religion and the secular, has been shaping modern societies in the Middle East too. Moreover, recent scholarship has highlighted patterns of secularity both within modern Islamic thought and in Islamicate history.

The lecture first establishes the factual secularity of modern Middle Eastern societies, focusing on the relation between religion and politics. Moving from structures to ideas, it then shows how modern Islamic thought conceptualized secularity. Examples from Islamicate history will make clear that secularity in the Middle East was not the exclusive product of colonial modernity, but drew also on earlier distinctions between religion and the secular.

Florian Zemmin is Senior Researcher at the Centre for Advanced Studies in the Humanities and Social Sciences “Multiple Secularities - Beyond the West, Beyond Modernities,” Leipzig University. He is the author of Modernity in Islamic Tradition. The Concept of ‘Society’ in the Journal al-Manar (Cairo, 1898–1940) (De Gruyter, 2018) and co-editor of Working with A Secular Age: Interdisciplinary Perspectives on Charles Taylor's Master Narrative (De Gruyter, 2016) and Islam in der Moderne, Moderne im Islam. Eine Festschrift für Reinhard Schulze zum 65. Geburtstag (Brill, 2018).