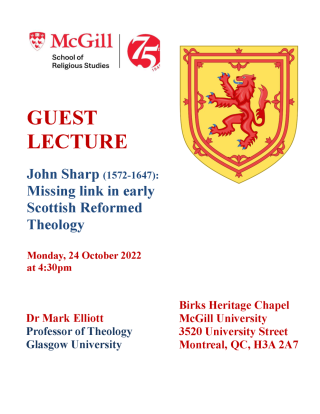 Professorial Fellow, Wycliffe College, Toronto, and Professor of Biblical and Historical, Theology, Highland Theological College/University of the Highlands and Islands.

This paper relates the life and context in Scotland and in the Dauphiné of the little-known early modern Scottish theologian, John Sharp. It then looks at two of his four works in some amount of detail. It seems that his French sojourn insulated him from the questions of Arminianism, hypothetical universalism, the nature of Christ’s atonement , the extent of Divine Election and the content of Federal Theology: in other words all the things that divided the Reformed cause in the early decades of the seventeenth century. In conclusion it will be argued that his stressing the ‘sixteenth-century’-sounding controversies of the clarity and authority of Scripture, the meaning of Justification and a resistance to recent Catholic Apologetics would provide a continuity between the Scottish Reformations of Knox and Melville, and that which united the otherwise fissiparous Scottish Reformed theology of 1638 onwards.