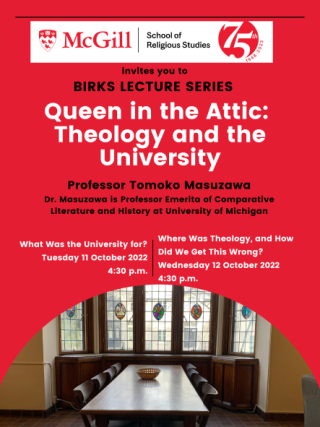 Professor Tomoko Masuzawa will speak on, Queen in the Attic: Theology and the University. Where Was Theology and How Did We Get This Wrong?

Was theology the “queen of the sciences” and the highest authority in the medieval university? When we consider what is known about the earliest universities that came into existence in the 12th and 13th centuries, it becomes readily apparent that this familiar sobriquet stems from certain phrases for self-promotion, not a description of reality. Surveying broadly what today’s historians of early universities have to tell us, we may now adjust our image of the institution, taking a more serious look at the university’s origin and its raison d’être. Accordingly, it is necessary to correct our received notion of the place of theology in the medieval academy. And we may start asking ourselves how we, the moderns, have been so consistently mistaken.

Tomoko Masuzawa is Professor Emerita of History and of Comparative Literature at the University of Michigan. Born and educated in Tokyo, she holds an MA (Yale) and a Ph.D. (UC Santa Barbara) in Religious Studies. She is a scholar of European intellectual history, with a special interest in modern discourses on religion and the history of human sciences. She previously taught in the Religious Studies Department at the University of North Carolina, Chapel Hill. Her publications include In Search of Dreamtime: the Quest for the Origin of Religion (1993), The Invention of World Religions: Or, How European Universalism Was Preserved in the Language of Pluralism (2005), “The Bible as Literature?—Note on a Litigious Ferment of the Concept” (2013), “Striating Difference: From ‘Ceremonies and Customs’ to World Religions” (2014), and “Theology, the Fairy Queen” (2021). She has held a Guggenheim Foundation fellowship as well as a membership at the Institute for Advanced Study (Princeton, NJ).