Professor of Islamic and Interreligious Studies

(on sabbatical leave until August 2022) 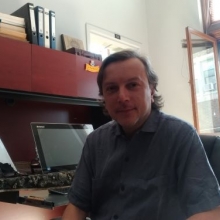 Armando Salvatore is a scholar of comparative religion. His primary focus is on inter-religious and trans-civilizational dynamics. Salvatore’s overall approach is interdisciplinary, but his methodologies rely largely on historical-comparative sociology, social theory, and the sociology of knowledge. His most recent single-authored book is The Sociology of Islam: Knowledge, Power and Civility (Wiley Blackwell, 2016). Among his other recent publications are the chief editorships of the multi-authored works The Wiley Blackwell History of Islam (Wiley Blackwell, 2018) and The Oxford Handbook of the Sociology of the Middle East (Oxford University Press, in press).

You can find my publications at the following link: https://mcgill.academia.edu/ArmandoSalvatore Professor Salvatore is not taking new graduate students at this time.

Cosmopolitan Connections in a Global Age

Cosmopolitan Connections in a Global Age