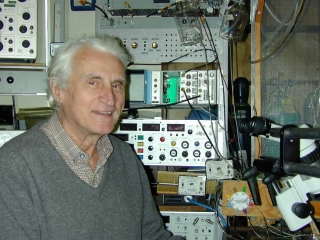 Krešimir – Krešo (later in life Kris and KK) Krnjević was born on September 7, 1927 in Zagreb, Croatia in the family of Dr Juraj Krnjević, then Secretary of the Croatian Peasant Party, and Nada Hiršl. The political situation in Yugoslavia very much influenced his early years and the next 20 years of peripatetic lifestyle. The family was forced into exile 1930 and, until establishment of Croatian Banovina in 1939, they lived in Switzerland where Kris completed junior high school in French. Three years in the IV Real High school in Zagreb were KK’s only formal education in Croatia. The stay in Zagreb was again interrupted by WWII. Kris’s father had to leave the country in 1941, this time as part of the Croatian contingent of Yugoslav government in London, never to return to his beloved homeland. His children, however, were sent to the safety of South Africa, where in 1944 Kris completed his high school – in English.

As a child Kris wanted to become an engineer; later his interests extended to psychology, architecture and medicine. In 1944, he entered one of the most distinguished medical schools in Great Britain – University of Edinburgh. Interest in engineering, technology and exact quantitative measurements never left the future neuroscientist, and provided him with a great deal of insight and tools in solving biological problems. Soon upon completion of medical studies in 1949, Kris found that despite strong affinity for clinical medicine, he disliked its hierarchic and stifling structure, and decided to embark on research - to study the brain with a distant goal and promise that neurophysiology will help to bridge the chasm between brain physiology and psychology.

Kris completed his Ph.D. in 1954 and following the advice of his supervisor went for a post-doctoral experience to University of Washington in Seattle, supported by the prestigious Beit Memorial Fellowship. A chance meeting with John C Eccles brought him to National University in Canberra, Australia. By the late fifties, Jack Eccles was a dominant figure in the world of neurophysiology. He established the foundations of cellular neurophysiology as it is known even today, which was crowned by a Nobel prize 1963.

This fruitful collaboration with Ricardo Miledi and Jack Eccles in Canberra ended when Kris accepted invitation by John Gaddum, a dominant figure in pharmacology of the first half of 20th century, to move to the ARC Institute in Babraham, UK. A few years later in 1964, Kris accepted invitation to spend a year at McGill University as Visiting Professor. As it happened, moving to Montreal concluded the peripatetic lifestyle and started half a century of exceptionally productive career in Canada. At McGill, he became Director of Research in Anesthesia Department and later Chairman of the Physiology Department.

It is difficult to describe all the areas of brain research that Kris explored in over 50 years of research and over 300 publications. It covers studies on peripheral nervous system, neuromuscular junction, synaptic mechanisms and neurotransmitters, mechanism of anesthesia, hypoxia, role of divalent ions, to pharmacology and physiology of hippocampus and other - most of them pioneering, with far reaching consequences. Only a few prominent discoveries are described.

One of the focal areas of his research was humoral neurotransmission. At the time, small molecules like acetylcholine and catecholamines were recognized as transmitters in the peripheral nervous system – but nothing was certain about neurotransmitters in CNS. Using microiontophoretic application of minute amounts of test substances on single neurons, Kris and numerous collaborators embarked on an extensive exploration of a wide range of compounds, especially those naturally occurring in the brain. This pioneering work lead to major discovery of neurotransmitters in the central nervous system. It established the roles of previously unsuspected endogenous amino acids such as glutamate for excitation, and GABA for inhibition. The findings opened the doors for major advances in neuropharmacology since many agents were recognized to interact with mechanism of neurotransmission (eg, benzodiazepines acting on GABA receptors).

Kris’s discovery and analysis of slow excitation by acetylcholine (ACh) in cerebral cortex established a new ionic mechanism of synaptic transmission by decreasing conductance to K ions. This novel mechanism of transmitter action, not as a direct excitant but rather potentiating other excitatory inputs was the first example of what became known as modulatory mechanism. Additional histochemical studies by Kris and collaborators demonstrated that cholinergic fibers (those containing ACh) to cortex originate from the basal forebrain – a neuronal system that has been associated with consciousness and later found to degenerate in dementia.

Kris established a novel role of intracellular Ca2+ ion: opening of K channels and thus regulation of excitability by hyperpolarizing the neuronal membranes. The discovery established Ca2+ ions as an important intracellular messenger, providing a link between metabolism and excitability. It opened a vast area of research, as such channels are found in many central and peripheral nerve cells throughout the animal kingdom. The cholinergic depolarizing modulatory action could be counteracted by hyperpolarizing action of cytoplasmic Ca2+ ions, mediated by increased K conductance. Resulting opposite shifts in cortical activity were proposed as possible mechanisms of consciousness and anesthesia.

In 1981, Eugene Garland of ISI and Current Contents established Kris as one of the 1,000 most cited contemporary scientists and named three of his papers "citation classics."

Kris remained attached to his Croatian roots. Despite his short studies in Croatia he commanded an eloquent Croatian and was present in Croatian neuroscience as lecturer and member of societies: Honorary Member of Croatian Pharmacological Association (1983), Honorary President and Member of the Advisory Board of Croatian Institute of Brain Research (1991-2021 ), Corresponding Member of Croatian Academy of Arts & Sciences (1992), Spiridon Brusina Prize, Croatian Natural Science Association (2001). In Canada, Kris accepted to be Honorary President of Almae Matris Croaticae Alumni, Quebec (1990-2021). He was also president of International Croatian Initiative (1992-1998).

Those interested in knowing more about KK can read his autobiographical note prepared for the Society of Neuroscience.

This obituary was adapted from a biographical sketch written by a dear colleague of Dr. Krnjević and close friend of the department, Dr. Ante L Padjen, MD, DSc (Zagreb), since 1976 professor of pharmacology, therapeutics and neuroscience at McGill. He was the first graduate student of Dr Mirjana Randic upon her return from a 3-year postdoctoral fellowship with Dr Krnjevic. As a neighbour on the 12th floor of McIntyre Building he had particular privilege to converse with Dr Krnjevic about neuroscience, music, art, literature - and Croatia.