What doesn’t kill you may make you live longer 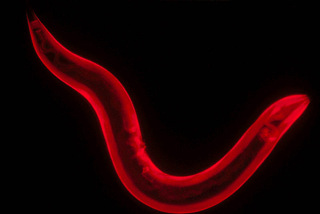 Many people believe that free radicals, the sometimes-toxic molecules produced by our bodies as we process oxygen, are the culprit behind aging. Yet a number of studies in recent years have produced evidence that the opposite may be true.

Now, researchers at McGill University have taken this finding a step further by showing how free radicals promote longevity in an experimental model organism, the roundworm C. elegans. Surprisingly, the team discovered that free radicals – also known as oxidants – act on a molecular mechanism that, in other circumstances, tells a cell to kill itself.

Programmed cell death, or apoptosis, is a process by which damaged cells commit suicide in a variety of situations: to avoid becoming cancerous, to avoid inducing auto-immune disease, or to kill off viruses that have invaded the cell. The main molecular mechanism by which this happens is well conserved in all animals, but was first discovered in C. elegans – a discovery that resulted in a Nobel Prize.

The McGill researchers found that this same mechanism, when stimulated in the right way by free radicals, actually reinforces the cell’s defenses and increases its lifespan. Their findings are reported in a study published online May 8 in the journal Cell.

“People believe that free radicals are damaging and cause aging, but the so-called ‘free radical theory of aging’ is incorrect,” says Siegfried Hekimi, a professor in McGill’s Department of Biology and senior author of the study. “We have turned this theory on its head by proving that free radical production increases during aging because free radicals actually combat – not cause – aging. In fact, in our model organism we can elevate free radical generation and thus induce a substantially longer life.”

The findings have important implications. “Showing the actual molecular mechanisms by which free radicals can have a pro-longevity effect provides strong new evidence of their beneficial effects as signaling molecules”, Hekimi says. ”It also means that apoptosis signaling can be used to stimulate mechanisms that slow down aging”.

“Since the mechanism of apoptosis has been extensively studied in people, because of its medical importance in immunity and in cancer, a lot of pharmacological tools already exist to manipulate apoptotic signaling. But that doesn’t mean it will be easy.”

Stimulating pro-longevity apoptotic signaling could be particularly important in neurodegenerative diseases, says Hekimi. In the brain the apoptotic signaling might be particularly tilted toward increasing the stress resistance of damaged cells rather than killing them, explains Hekimi. That’s because it is harder to replace dead neurons than other kinds of cells, partly because of the complexity of the connections between neurons.